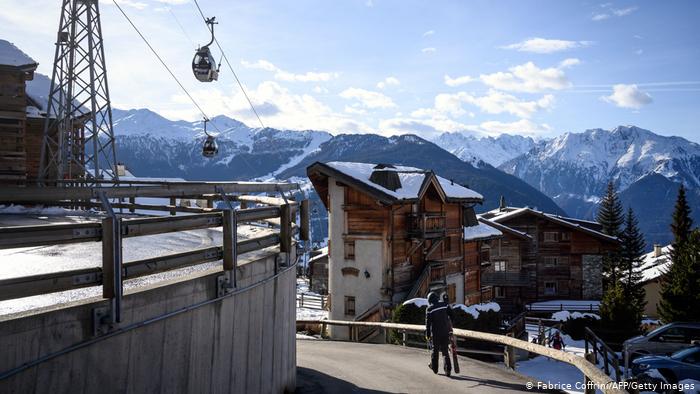 About half of the Britons who were supposed to serve quarantine in the ski resort of Verbier have gone into hiding. Swiss authorities began to suspect something unusual because their meals were left untouched.

Hundreds of British guests put in quarantine over the new, more infectious variant  of the coronavirus have fled from the Swiss ski resort of Verbier, with some of them re-emerging in France, Swiss authorities reported on Sunday.

Verbier, an alpine village located in the municipality of Bagnes in Canton Valais, is a popular ski destination for British tourists.

Bagnes spokesman Jean-Marc Sandoz told the German Press Agency that Swiss authorities had identified 420 guests from the UK who were ordered into quarantine before Christmas.

About 50 fled immediately, and of the 370 others, less than a dozen were still there on Sunday, he said, adding that some of the guests have re-appeared in neighboring France.

“Many of them stayed in quarantine for a day before they set off unnoticed under cover in the darkness,” Sandoz said.

According to local media, hoteliers began to suspect a “secret departure” because calls to quarantine rooms “were repeatedly unanswered” and the meals left in front of rooms “had not been touched.”

“That was the worst week our community has ever experienced,” Sandoz told newspaper Sonntags Zeitung, calling it an “unprecedented situation.” He said Bagnes felt abandoned by both the federal and regional governments.

The spokesman condemned Switzerland’s decision to hastily impose quarantine requirements for people arriving from the UK.

“We understand their anger,” Sandoz said.

On December 20, Switzerland blocked all flights from the UK and South Africa in connection to the new variants of the coronavirus  found in those countries.

A day later, Swiss authorities ordered all people having arrived since December 14 to be quarantined retroactively for 10 days from their date of arrival.

DISCLAIMER: The Views, Comments, Opinions, Contributions and Statements made by Readers and Contributors on this platform do not necessarily represent the views or policy of Multimedia Group Limited.
Tags:
British Tourists
Coronavirus
quarantine
Switzerland
Verbier ski resort