I feel hurt when people link my successes to Richie being on the VGMAs board - KiDi - MyJoyOnline.com 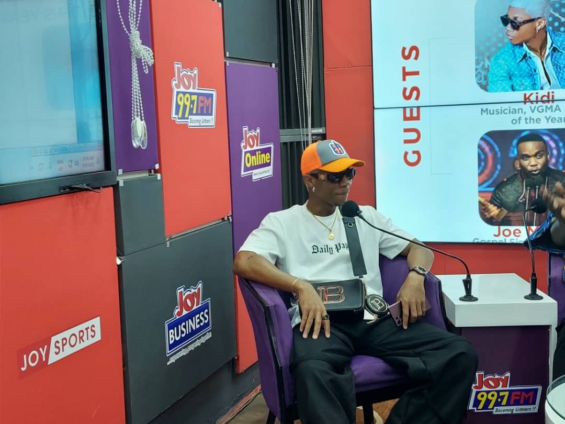 The 2022 VGMAs Artiste of the Year, KiDi, has said that it breaks his heart when people tie his successes in the famous music awards scheme to Richie, his manager, being on the board.

The Vodafone Ghana Music Awards (VGMAs) Artiste of the Year, born, Dennis Nana Dwamena, said he feels discredited for his hard work each time that statement is made.

“It’s crazy that every VGMAs night when I go on social media, I always see comments like, “as for KiDi [and co] they are winning because Richie is on the board. A lot of things don’t hurt me, but I feel like sometimes that statement hurts me more,” he said.

The ‘Touch it’ hitmaker, speaking on the Super Morning Show, on Monday, after he bagged five awards at the just-ended VGMAs, stressed that his successes are the results of hard work backed by a vigorous campaign for votes before the awards night.

“There’s a campaign and it’s not just me. Every member of the team comes on board to join the campaign. It’s like a flock in the church – evangelism- everyone is going out to preach the word about KiDi; that ‘KiDi’s been nominated so make sure you vote for him,” he said.

He, therefore, finds it surprising when his successes are linked to Richie being on the VGMAs board. KiDi refuted any claim to that effect, stressing that “first of all, it’s not true and secondly, it discredits my hard work as an artiste.

“[People who do that] are trying to say that all the hard work does not count because Richie is on the board, but sometimes I don’t even know who is on the board,” he said.

The musician, who failed to claim the ultimate spot in 2021 after his famous ‘I’ll be back’ phrase, returned to win his first-ever Artiste of the Year Award.

In addition to this, he bagged the Reggae/Dancehall Song of the Year with the song ‘Touch It,’ the Vodafone Most Popular Song with the same song, the Album of the Year (The Golden Boy), and the Afrobeats Artiste of the Year.