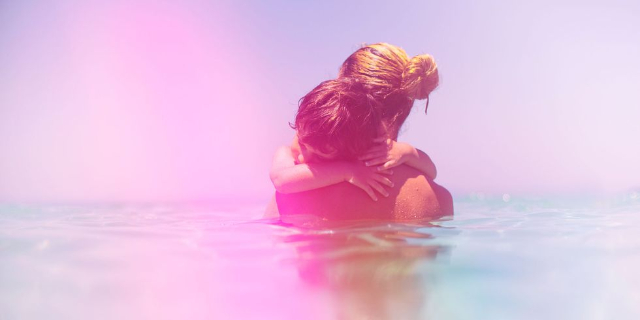 We drank one bottle of red wine after another. I told him about the book I dreamed of writing, he told me how he came to live in Barcelona. We told each other anecdotes and talked about who we were, where we wanted to go. We left the bar and kissed on the steps of the Santa Maria del Marchurch in El Borne. I wore gloves with no fingertips and he wore a scarf around his neck.

I hung off his every word and he off mine. Everything he said was interesting, different. He made me see things with a new slant. He had other interests and opinions to me, and I loved it. On our first proper date, he dressed like he was going for a beer around the corner. I was all dolled up in an LBD and ankle boots. Being with him was fun and frustrating and thrilling.

Fast-forward eight years, and our days are one long To Do list – and we’re nowhere to be seen after dark, thanks to the wonderful addition of our 17-month-old baby. My whole world has changed, and with it, my feelings towards my husband. Here’s what I loved about him… and then didn’t.

When you go on a date, you’re looking for a partner in crime, and in life. Someone you can depend on, someone who’s committed. So when I saw this dedicated person who put so much into his work, was dependable and reliable and respected by his colleagues, my mating radar went off: beep-beep-beep.

Now when it’s 8pm and he’s not home, and I’m holding a six-month-old baby and haven’t showered yet, or had dinner, or gone to the loo for five hours, that quality is substantially less endearing. Not only do I not love my husband as much, a tiny bit of me actually hates him for not leaving work earlier, for being more dedicated to his work than me, and for letting me get to this point of desperation and fragility.

He’s got a great sense of humour

How he made me laugh. If there’s a laugh to be had, he’ll seek it out with his comedic claws. This was hilarious… until we had a baby. When you’re exhausted, stressed, anxious and about to cry, there’s not much to laugh at.

It’s as if my sense of humour has been (hopefully temporarily) removed during keyhole surgery. And when you’re physically and emotionally exhausted, your dear husband finding the funny side is just about the worst thing he can do. It leaves you feeling miles apart from him, and just heightens the different realities the two of you are living in.

He is Mr Laid-Back

His calm, easy-going demeanour drew me to him, the perfect salve to my more nervous, neurotic disposition. But, in my experience, a relationship is like scales and you balance each other out. If one person is stressed, the other acts calm. If one is easy-going, the other will make plans.

This means it’s always me who is stressed. On the very few occasions when my husband takes the stress mantle, I take a perverse kind of joy in being the one to take a deep breath and say those two disgusting words: “Calm down!”

We have cultural differences

His being from another country enthralled me. His culture, upbringing, points of reference, and ways of seeing things captivated me. Now, when we’re facing new, sometimes terrifying territory, and learning how to rear our baby, how to speak to her, how to live our lives together as a family, we have fundamentally different ways of wanting to do it.

Will we speak English or Spanish at home? Will she have her ears pierced like all the other Spanish baby girls, or not? Will we have Santa Claus, or a guy carrying carbon (from the Basque Country in northern Spain) at Christmas? It’s not romantic, it’s grey and hazy and confusing, like we’re navigating a ship and we both want to go in different directions.

He loves his village

He told me tales of his tiny village in La Rioja, northern Spain, from where his parents hail. Where he has dogs, where the air is pure, where he spent every summer as a boy, where he walked for hours accompanied by only his dogs and a sandwich.

So here we are… 18 months have passed since two became three, and we're starting to get the hang of it. It's evening, and the toys have been put away. Toddler daughter is dinnered, bathed, booked and now sound asleep. I go into the kitchen where my husband is washing the dishes and tidying up. I open a bottle of wine and pour two glasses. I get the chocolate out.

"What was your name?" I ask, handing him a glass.

We laugh and take a sip of our wine.

And for just a little while, it's the two of us again – the same pair that kissed on the steps of that beautiful Santa Maria del Mar church in Barcelona.