I hired a sex worker to save my marriage; this how it changed our lives - MyJoyOnline.com

I hired a sex worker to save my marriage; this how it changed our lives 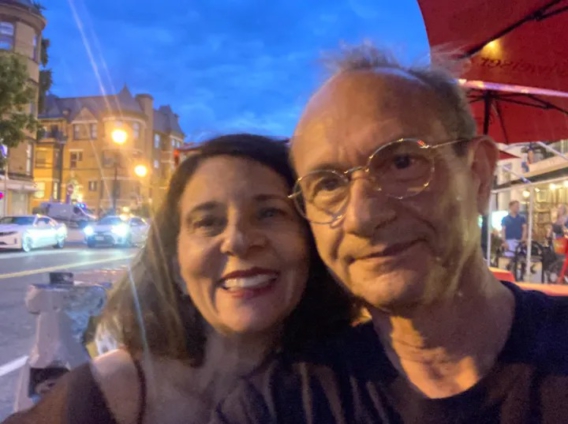 The author and her husband, Kurt, "madly in love."

She was speaking of our general arrangement. We were staring at her bed. In her red wrap-dress, gold sandals and brown bob, she looked like a 50-something starlet from a bygone era. Her current vocation was more relevant.

On her website, I’d read she was a “tantrika” offering sensual experiences for therapeutic purposes: a practice loosely known as sexological bodywork.

This type of genital client engagement — featured on Gwyneth Paltrow’s Netflix series, “Sex, Love & Goop” — is illegal in every state except California. We were not in California.

I hadn’t come for criminality. As a petite, middle-aged woman with a penchant for blazers and low heels, I’d arrived at this last resort to heal. Thirty years of silence, interspersed with conventional remedies, had yielded little recovery from abuse-related dysfunction. I had issues with desire, arousal and orgasm. Penetration was just as painful now as my first attempts at 17. This plethora of problems had ruined every relationship I’d ever had. But at 46, miraculously, I married someone wonderful.

Kurt supported my overcoming a universe of hurdles. I couldn’t seem to begin. In fact, all my symptoms got worse after the wedding till our union became a pendulum — nighttime crying swung, in the daylight hours, to tight-jawed pleasantries. This was not the ecstatic merging I’d waited for my entire life. I needed to reclaim a potential that had been stolen from me.

Yet now that I had the chance, I stood frozen before the tantric expert’s brass bed.

“You know,” she began in a lilting Italian accent. Her name was Francesca. “You don’t even have to take your clothes off. Or I could take off my clothes.”

“That’s OK!” I practically shouted. A second later, taking control of the situation, I began removing my yoga pants. “I only want to take off my lower half,” I told her.

I told myself: Just like at the gynecologist, acknowledging this was nothing like any physician’s office I’d ever been to. I wanted this experience to be different. Maybe I could finally get answers to questions plaguing me since the Reagan years. Why was there burning with intercourse? Were bad sensations the only reason I had no desire? Did I possess a capacity to climax?

For years, I never grilled an OB/GYN. They seemed perplexed enough by knees that wouldn’t plop open during exams, even when I told them — on their medical history forms and verbally — I’d been violated.

The one time I requested an overview of coital mechanics, my doc pointed to a poster of the female reproductive system, blinking furiously. She said I was maneuvering my husband’s penis into the wrong part of the vagina. “It’s not supposed to hit the cervix,” she scolded. Apparently, I was a failed fornicator.

A few were more vocal, like Dr. Fay, who insisted the sexual abuse I experienced as a child had zero effect on my carnal responsiveness. “Maybe you’re just not a very sexual person,” she concluded. Her next breath was a warning: I should sleep with my husband whenever he wanted; otherwise, he’d leave.

A sex therapist I consulted with — from the basement of a Panera — stopped me after three minutes. “You have pelvic pain? I don’t see anyone with pelvic pain.” I was too broken for even a sex therapist.

Francesca had no trouble with my barrage of Qs. Prior to entering her boudoir, we had sat in a front office, where I detailed every crevice of my history. She emphasized that the physical component of our 90 minutes together could bring illumination. I nodded, while thinking, If this really is sex work, how will that play out?

Here’s how. Once I was undressed, the tantric mistress placed a navy towel on the puffy gold comforter. She plopped down beside me. “Tell me,” she said. “Do you know where the clitoris is ― I mean on your body?”

I laughed, relieved we were starting with basics. “Of course,” I declared, showing her what she was looking for.

“Isn’t this the clitoris?” I asked, indicating the flesh I was holding between index finger and thumb.

“That’s still only the hood,” she replied.

Hot shame spread across my face. Francesca patted my leg gently before repeating the phrase: “May I touch you?” This time, consent was for real — with contact. A moment later, I felt her warm hand: “So you pull this up, OK? … Here is the clitoris. Of course, when you’re aroused it will be much bigger.”

I had to strain my neck to see the shiny head poking through. “I didn’t know,” I said, wiping fat tears from my cheeks.

“That’s why you’re here!” Her liquid brown eyes were smiling, with cute crinkles in the corners. “Do you know how few women know they’re built like that?”

I tried hard to believe her as she fetched a mirror.

Then, like Lewis and Clark in lipstick, the sexological bodyworker and I mapped my pleasure terrain. We began at the recently excavated bliss button. She showed me how it extended from the hood to a shaft before going underground — an internal network of tumescence. On the skin above, we traced clitoral “legs” running inside labia, and “bulbs” hugging the opening to the vagina. “The full clitoris makes a wishbone shape,” Francesca told me.

No wonder I’d never enjoyed lovemaking. I hadn’t known where all the nerve endings were!

Sitting up now on the blue towel, resting from too many insights, sipping a glass of water she’d brought me, I listened to my guide describe our next adventure. She would teach me how to have penetration that actually felt good — the main reason I’d taken this risk. There were three parts to this lesson, and the explanation for each made me dizzy. I was advised to recline again so my brain could relinquish understanding to my body.

The first step was deep relaxation. My hostess had me do slow, audible exhales (“Ahhhhhh”) while pressing right above my public bone. Coordinating breath and pressure was awkward. Stunningly though, after some minutes, I felt a sudden release of my genitals ― like a fist unclenching.

I think I was still in shock from this success when we got to step two — engorgement and lubrication.

According to my teacher, I needed to comprehend these, experientially, in order for intercourse to go smoothly. In other words, she wanted me to get turned on.

Her logic was sound, yet it made my armpits damp. Sure, I’d come there to get savvy about arousal. But did I actually want to get aroused? Here? With her? I didn’t.

Though how else could I get the full picture? A view I’d paid $500 for, after saving for months.

There was no turning back. I let the Mediterranean sexpert stroke the upper right quadrant of my little happy place.

When she asked if she might do the same with my G-spot, I invited her to reach right in. Surprisingly, I felt no discomfort with entry ― only blood expanding the area, aka engorgement, and, yes, emerging lubrication.

As quickly as I could, I replaced her hand with my own, so I could calmly replicate her techniques. I took a deep breath, just like she taught me. The G-spot felt ridged, like Braille. It was like learning to read myself.

At this juncture, we were at step three: the finale. Francesca was going to teach me how to screw. That is, how to use my muscles in a manner that brought joy, not pain.

She demonstrated while lying beside me. “As the pelvis moves forward,” she instructed, lifting her loins off the blanket, “contract around the penis, and breathe in.”

I tried this alongside her.

“As the pelvis moves back,” she continued, placing her bottom back on the bed, “release the vagina muscles… and exhale.”

I felt thoroughly spastic, but before long I was dancing with her. Tushy up. Tushy down. With all the inner workings.

Where else was I going to get this information?

I don’t remember dressing — too much of a daze. I do recall handing her my credit card: the transaction. Hard to believe this was the act that could throw us in jail.

The real exchange was something else — her compassionate skill with my traumatized body.

It’s been eight years since my visit with Francesca, and I’m happy to report Kurt and I are going well. If a great marriage grows from a stable sensual connection, then my hands-on guru is a crucial part of our root system.

My husband and I use her instruction — anatomy, nerve endings, placement of parts, deep breathing — whenever we make love.

Maybe lots of nooky — and good info about it — accounts for the extra courage. Once I realized I wasn’t broken (just ill-informed), bravery sprouted in my heart ― and lower.

“Once I realized I wasn’t broken (just ill-informed), bravery sprouted in my heart ― and lower.”

I wish it hadn’t taken me 30 years to recover from early molestation — and that doing so didn’t break the law. Maybe one day, the U.S. will make sexological bodywork legal, like it is in California — that’s where Paltrow’s Netflix show is filmed.

Could my country even go the way of Denmark, where “sexual advisers,” trained by the government, help people with physical disabilities (those who use wheelchairs, for instance)?

What restoration looks like will vary from person to person. Not everyone wants their package handled by a bodyworker.

How are we to know options, though, without open discussion of healing modalities? We need frank conversations about bodies, pleasure and sexual solutions.

Since one size doesn’t fit all, they should be customized for each individual, throughout a person’s life. I believe the Danes have it right — sexual wellness is a critical part of overall health.

Hell might have to turn as cold as Copenhagen for America to value erections, particularly, the female kind. Till then, I’d gladly commit my crime again.

In fact, I did. A few weeks after seeing Francesca, I visited her a second time — with my husband.

He was curious how this magic woman had transformed me. He wanted his own transformation.

That session, focused primarily on emotional intimacy, equally informs our relationship. Here’s to all matrimony savers, whatever their legal status. Hail to all helpers of love.