I share gold coin honour with my country - Otumfuo - MyJoyOnline.com

I share gold coin honour with my country – Otumfuo 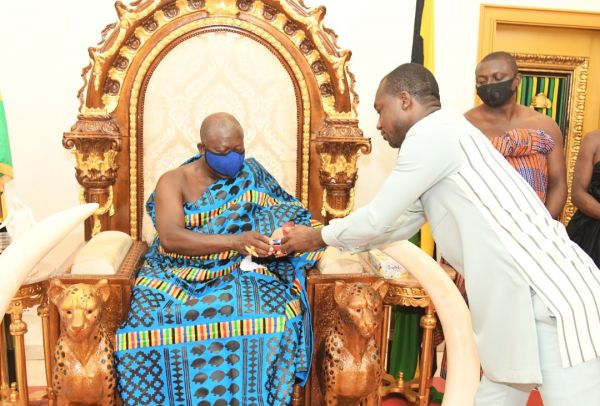 The Asantehene, Otumfuo Osei Tutu II, has said the Otumfuo Commemorative Coin is an honour he shares with his country, Ghana.

He said for more than two decades since he ascended the Golden Stool, he has not concentrated his peace initiatives to only Asanteman, but has ensured that the entire country benefitted from every initiative he took to ensure peace thrived.

Otumfuo Osei Tutu said this when he officially received his gold coin at the Manhyia Palace on Monday, December 20, 2021.

Officials of Access Bank (the official bankers), Gold Coast Refinery ( minters of the gold coin) and the E ON 3 Group , a business solutions provider, which powered the launch were at the Manhyia Palace to present the gold coin to Otumfuo.

Otumfuo Osei Tutu thanked the organisers for recognising his peace initiatives; adding that it was a reminder to all that Ghana needs to be jealously protect.

He said when he ascended the Golden Stool, he got all chieftaincy cases in Asanteman, which were in court to be withdrawn for settlement through the traditional system. This, he concluded has brought peace and unity amongst his people.

While maintaining that no country could develop without peace, the Asantehene said, democracy can also not thrive without an atmosphere of peace.

“I will not bury the truth but will say it as it is since that is the surest way of calming tensions and ensuring development, “ the Asantehene added.

He said if all lived together in peace as one people with a common destiny, the path towards progress will be smooth.

“Anything that I will have to do to bring peace to the country, I would not turn my back to it,” he stated

The Executive Director of E ON 3 Group, Richard Adjei Mensah Ofori Atta, who led the organisers to present the gold coin to Otumfuo said they were proud and privileged to have led the initiative to seek authorisation from the Bank of Ghana for the minting of the gold coin.

He said there were plans to initiate steps to present the Gold Coin to all the other Kingdoms in Africa to serve as a reminder for them to let peace be their watchword.

The Executive Director said on April 26, 2024, Otumfuo will be celebrating his Silver Jubilee coronation anniversary, which will be about seven months to the next general elections.

According to him, the role Otumfuo Osei Tutu II plays in ensuring peace during elections was known to all, and therefore, E ON 3 Group is hoping to partner with Manhyia Palace to work towards the realisation of peace before, during and after the 2024 general elections.

Again, he appealed to Otumfuo to visit Parliament to speak on consensus building, which is a major prerequisite for the smooth running of government.