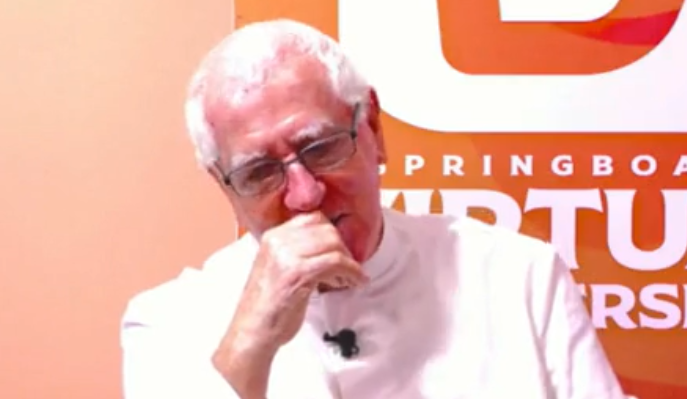 Immediate past Parish Priest of Christ, the King Catholic Church in Accra, revealed that he worked as a labourer in a grocery shop after primary school at age 13.

According to him, this was to enable him to raise enough money for his secondary education and support the family.

“After primary school, I told my parents I wanted to go to secondary school, but my dad said ‘there was no money. So you have to work’.

“I came from a catholic family, and we were happy….everything was God-centred. After primary school, I was inspired to be a priest, and I worked as a labourer to see this dream come true,” he recounted.

Rev. Campbell made these revelations in an exclusive interview with Albert Ocran on Springboard, which was aired on the Joy Prime channel on Monday.

According to him, he received 30 shillings a week while working as a labourer.

He founded the Lepers Aid committee in 1993 to care for persons with leprosy. The NGO has established and run leprosariums in Weija, Ho, Nkanchina and Kokofu in Ghana.

His dedication to serving humankind is second to none and has made him influential in Ghana.

Father Campbell said he was inspired by reading magazines of Catholic priests and believed that was how he encountered Christ and his decision to enter into the vocation.

“I come from a religious home, not wealthy, but when I see people doing missionary work in Africa, it touches my heart. I dreamt of preaching the word of God to people when I was a child.”

“My life has always been lived for others. I am inspired by Mother Teresa of Calcutta’s Mantra, doing something beautiful for God”. My parents also inspired me to believe in God,” he indicated.

Rev. Father Campbell said the passion to be a catholic priest forced him to work hard to raise money for secondary school and continue to a seminary.

DISCLAIMER: The Views, Comments, Opinions, Contributions and Statements made by Readers and Contributors on this platform do not necessarily represent the views or policy of Multimedia Group Limited.
Tags:
Christ the King parish
Parish Priest
Rev. Father Andrew Campbell