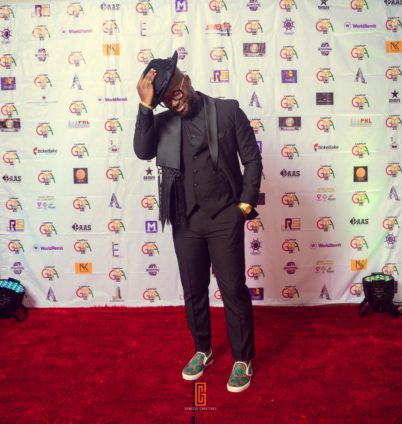 Radio/TV, media personality, and entertainment journalist Ibrahim Ben-Bako exhibited a class that left attendees speechless with his high-toned habitude as one of the official hosts of the red carpet at the just ended Kab-Fam Ghana Music UK 21.

The air, vigor and, aura around the look he carried on the day of the event was extremely striking to the extent that it was impossible to take your eyes off him.

Ibrahim Ben-Bako who works under the umbrella of The Multimedia Group, became the center of attention like the star of the day. I am very certain that was his original plan. He executed it with ease

Out of curiosity, I reached out to Ibrahim, short form, Ibra about who styled him for the event. Even though there was a touch of Kojo Vandie, to my amazement, he styled himself. Those who know him closely will attest to the fact that Ibrahim has been a fashionista from God knows how long.

Just so you know, he has been on almost all the red carpet shows in Ghana, therefore he is always conscious of his looks. No wonder he’s always looking dapper.

It’s paramount to note that, Ibra has enrolled in RIOHS, a fashion school located at Dzorwulu to enhance his fashion sense. He has also won 4 awards to his credit as a media personality.

Teaming him up with his co-host, award-winning radio personality Doreen Avio was a feast of the eyes during the red carpet session. The duo is a perfect match for any event across the globe. The chemistry between the two was very charming. They made the red carpet worth honoring.