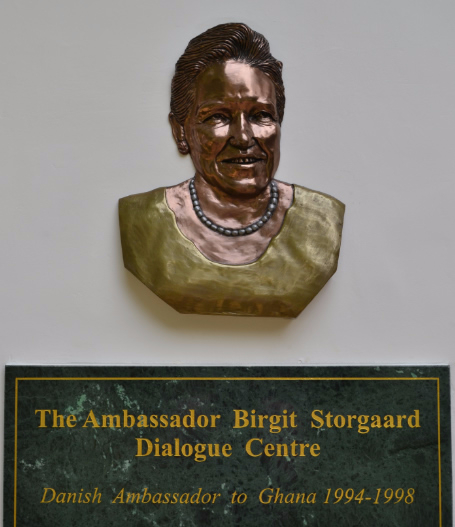 The Conference Hall of the Institute of Economic Affairs has been named after the former Danish Ambassador to Ghana Birgit Storgaard.

This is in recognition of her unflinching support to the development of the arms of Government, particularly the Legislature and the Judiciary, as well as key governance institutions in Ghana, the Board of the Institute indicated.

Birgit Storgaard was Danish Ambassador to Ghana from 1994 to 1998, a period when Ghana had just been ushered into democratic rule after almost 11 years of military dictatorship.

"This was barely two (2) years after the 1992 elections. The long years of military rule in Ghana had left in its wake, weak and in some cases non-existent institutions of State. A culture of silence loomed and there was hardly any open dialogue on pertinent national issues," a statement from the IEA said.

"Ambassador Storgaard contributed a legacy of initiatives to strengthen dialogue and consensus building within Ghana’s democracy. Her support led to the development and implementation of several capacity-enhancing initiatives for the institution of Parliament and for parliamentarians. These groundbreaking programmes include: The Orientation Programme for new members of Parliament which ensured that all new MPs were oriented to understand the workings of Parliament and their role as MP.

"This program has now been adopted and institutionalized by Parliament. The Legislative Assistants Programme – The IEA with the support of DANIDA, recruited bright young graduates from Ghanaian Universities and trained them as research assistants to support the work of parliamentarians.

"This programme has been institutionalized by Parliament and several pioneer research assistants have become parliamentarians and clerks in the House.

She is also credited with the work of The Speakers Breakfast Forum "which has brought together the Speaker of Parliament and relevant stakeholders from various sectors of national life to discuss key development issues confronting Ghana at the time.

"This forum helped to demystify Parliament, and enabled the leadership of Parliament to hear firsthand what the views of the public on various subject matters were. Amb Storgaard’s initiatives and work have contributed to the recognition of Ghana as a beacon of hope for democracy on the continent. Today, leaders of political parties in the region undertake exchange programmes to Ghana and the IEA to learn about interparty dialogue and consensus building."