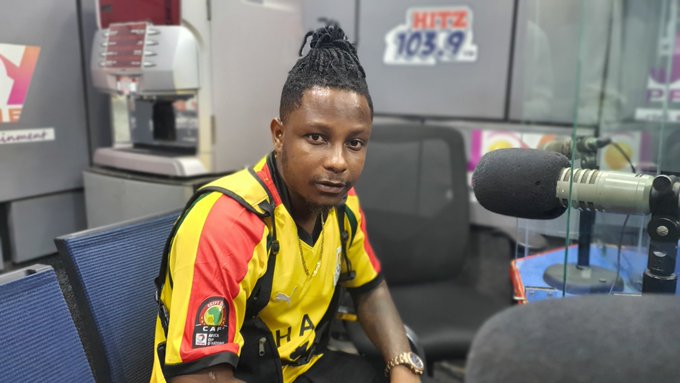 Musician Kelvyn Boy has revealed that smoking is a habit he does not plan to give up any time soon.

According to him, smoking is essential to his mental stability adding that, contrary to the fact that smoking can make one mad, his case is the other way around.

Speaking on Daybreak Hitz on Hitz FM, Monday, Kelvyn Boy said that “for real, I smoke. You see the way people think that if you smoke you go mad? Me, if I don’t smoke I will go mad.”

The ‘Visa’ hitmaker added that he does not like to hide that part of him or create a false personality for the general public.

“I like to stay real and I feel like this thing I do is my life, it’s my lifestyle too,” Kelvyn Boy said.

Meanwhile, Kelvyn Boy is currently promoting the remix of his hit song ‘Down Flat’. He revealed that his life, career and finances have been impacted positively following the release of the song.

He told Andy Dosty on the show that he has been able to buy himself a car and plots of land.

Careerwise, he noted that the song has also opened many doors for his career, especially during his concert beyond the borders of Ghana.

Kelvyn Boy added that he also had the privilege to meet and work with some big artistes in Europe while on tour.

The remix of ‘Down Flat’, he said, features Nigeria’s award-winning producer and musician Tekno and UK-based artiste Stefflon Don.

He added that he got offers from other artistes including Nigeria’s Joeboy for a remix.

DISCLAIMER: The Views, Comments, Opinions, Contributions and Statements made by Readers and Contributors on this platform do not necessarily represent the views or policy of Multimedia Group Limited.
Tags:
Kelvyn Boy
Kelvyn Boy Smoking
Smoking