IMF program with Ghana is a sham – Dr. Bawumia 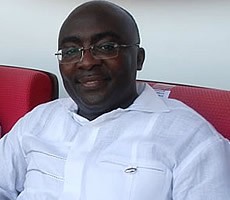 Ghana entered the program to help the country’s ailing economy, but Dr. Mahamadu Bawumia observes the situation has witnessed a complete reverse of the expected solution.

He was speaking at a lecture organised by the Economics department of the KNUST in Kumasi in the Ashanti region, on the topic; Graduate Unemployment.

"When we went for the IMF bailout, we expected that our fiscal consolidation debt stock, interest rates and unemployment will come down and economic growth will go up," Dr. Bawumia said.

The former deputy governor of the Bank of Ghana said since Ghana borrowed from the IMF, borrowing and interest rates has all skyrocketed with economic growth in a nosedive and the country saddled with unemployment.

He said the above is the reason why he calls the whole fiscal consolidation idea a sham.

Dr. Bawumia also explained graduate unemployment could be reduced if the government introduces what he calls employment tax rebate to companies that employ fresh graduates.

"We can address the issue of unemployment by also giving specific tax incentives to companies that hire fresh graduates," said Dr. Bawumia.

He explained that to demonstrate the NPP's focus on productivity and jobs for the youth in Ghana, the introduction of the employment tax scheme will ease the pressure on companies hiring fresh graduate since they will save money by employing them.