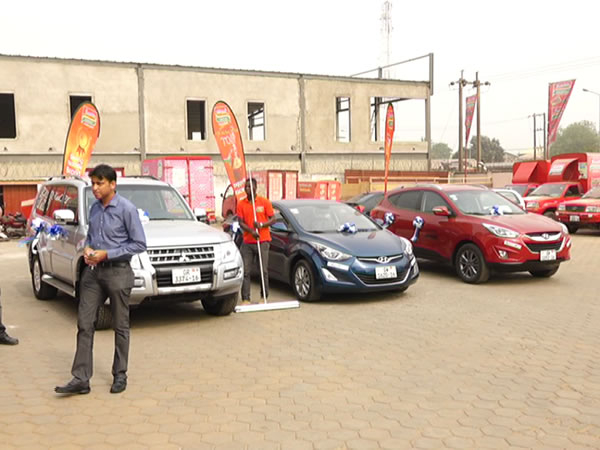 Businesses are resorting to innovative strategies to stay in business especially, as the country’s economic squeeze persists.

One of such is Multi-Pro Private Limited, Producers of Indomie instant noodles. Last year in particular saw several businesses go down due to the power crisis, among other economic challenges.

Some businesses have therefore adopted cost-cutting measures while others have laid off workers to survive.

But Multi-Pro Private Limited, Producers of Indomie instant noodles, has chosen to rather motivate its clients to sell more by rewarding its best-sellers with vehicles and other electrical appliances.

Winner of the Mitsubishi Pajero SUV Mavis Debrah expressed her delight saying, it is the best moment in her life. She however, noted that she worked hard for it.

According to her, even though 2015 was a very difficult year economically, she was determined to meet the target given her by the company in order to win the car hence, the reward. “I have been working with Multi-Pro Private Limited for the past 10 years and I think it has paid off” she told JOY BUSINESS.

Gifty Gyamera who was rewarded with a Hyundai Elantra saloon car was full of joy and thanked Multi-Pro Private Limited for the reward.

In all 20 vehicles including a Mitsubishi and Hyundai SUVs, trucks and salon cars plus other items like home theatres, fridges and mobile phones were given to 100 distributors across the country.

Zonal Supervisor, Muntari Zibo told JOY BUSINESS the company has made it a point to share its profits with deserving distributors because they are the ones who drive the success of the business.

According to him, 2015 was not a very good year in terms of sales and patronage but the company has a culture that makes it stand by its customers even in times of difficulty.

“This is because if you don’t do that, it makes it pretty difficult for any investor to invest in your business. This gesture also sends a signal to all our stakeholders that our brand is a reliable brand that grows with its clients” he emphasized.