Isaac Dogboe: Time to reflect and bite the bullet - MyJoyOnline.com

Isaac Dogboe: Time to reflect and bite the bullet 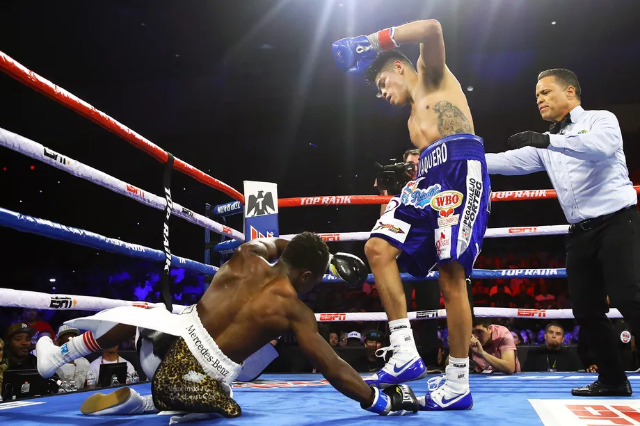 We cannot win all of life’s battles and that is why it is better to offer no excuse than a bad one. Sometimes it is better to simply say I lost. If Isaac Dogboe took anything away from his rematch against Emanuel Navarrete it is that he simply couldn’t match his Mexican opponent. One wonders why it had to take a second defeat for him to accept what was obvious from the first fight. This second beat down was needless. Poor choices have been made especially in the last 12 months which has culminated in what could prove to be a catastrophic set back to a promising journey.

Father and son fighter-trainer relationships are a commonplace in boxing, and most have been successful. This analysis may be harsh on Paul Dogboe but the sport and business of boxing is a hard terrain and hard choices must be made sometimes. Paul deserves credit for overseeing his son’s ascent to the very top of world championship boxing. It is, however, one thing climbing a mountain and another thing staying there.

The requirements for success differ at each stage in life’s journey and while letting go is sometimes difficult, holding on can culminate in having to pay a much higher price. To his credit, Paul Dogboe has built a boxer with a lot of heart which is unsurprising given his background as an ex-military officer. Many a boxer wouldn’t have lasted the full 12 rounds in the first fight and many still wouldn’t have thought about getting into the ring with Navarrete after being dominated in the manner the Mexican did in the first fight. Isaac Dogboe is brave but bravery only carries you so far in boxing without sound technical preparation. The boxer’s skill set may have been enough to get him to the top but it requires more to keep him there.

It is difficult to see Paul Dogboe maintaining his role as lead trainer but I won’t be surprised if he decides to stay on.  It was refreshing to hear Paul reveal his intentions to hand over his son to a more experienced trainer in the immediate aftermath of Isaac’s win over Jesse Magdaleno. He may not have said so in plain words but in many ways, it was an admission of his own technical limitations as evidenced in back to back defeats against a single opponent. What is telling is that both fights had the opponents asking the same questions in the ring. Paul Dogboe needed to come up with a game plan that answered a simple question[ how do you neutralize a pressure fighter with an overwhelming advantage in height and reach?] and he failed. The plan for the two fights was downright suicidal given Navarrete’s build.  There are glaring flaws in Isaac’s constitution and some of it came to the fore in the Magdaleno fight but the American lacked the ability to exploit it. The former champion’s penchant to go hunting opponents down with his head exposed had him down in the very first round against Magdaleno but it proved academic as in the end, his raw power won the day for him. Isaac Dogboe has been trained to use his power to overwhelm opponents which is okay, but what happens when a game plan built to ensure the utilization of Isaac’s raw power fails?

It is an indictment on his father that Isaac Dogboe goes into fights with the singular aim of knocking out opponents. Even more damning is his inability to make adjustments when the knockout game plan fails. My pre-fight analysis had Isaac Dogboe in with a good chance of beating Emanuel Navarrete if he could counter punch or fight on the inside and indeed former welterweight champion Timothy Bradly who was part of ESPN’s commentary team kept wondering why Navarrete was being allowed to keep Dogboe at a distance that allowed him to utilize his reach. When the Ghanaian’s defense was put to the test in the two fights against Navarrete it was clear there was none. If you have doubts check the post-fight images. It has become even more imperative that Isaac Dogboe bulks up technically because the blueprint to beating him has been provided by Navarrete. He requires a bit more dynamism to his craft and it is clear his father lacks the tools to equip him.

If Paul Dogboe requires evidence of the good a change in trainer can do for a fighter he can always look at Richard Commey’s decision to work with Andre Rozier after back to back defeats under Lawrence Carl Lokko.

Nobody knows Isaac Dogboe better than Paul Dogboe and the temptation to hold on to his role as lead trainer will always be there but it is time to bite the bullet and save his sons career. There’s fatherly love and there’s blind faith. In the sport of boxing, the line between the two can be very thin.

Denying the superiority of Navarrete after the first defeat was bad. Pushing for an immediate rematch was even worse but when you live in denial you get buried under its weight. It is trenchant that Isaac Dogboe talks about moving up to featherweight because he struggles to make the 122Ibs but did it really have to take a second beating to realize this? Why Isaac Dogboe and his team pushed for an immediate rematch beats my imagination. What happened in the first fight takes a physical and mental toll that requires time to work around. An immediate rematch was a serious misstep in what it represents for Dogboe’s career both inside and outside of the ring. It would have made more sense to have a couple of fights to work on the gaps exploited by Navarrete in the first fight and build up confidence.

Apart from the physical and psychological damage, it has also eroded a significant amount of the gains he’s made since winning the WBO super bantamweight strap against Jesse Magdaleno a little over a year ago. Surely the talk about becoming Africa’s first PPV star will have to be shelved for now at least. His route back to a world title has become longer and harder as he enters the unfamiliar terrain featherweight boxing. Time would have equipped Isaac Dogboe with the tools and blueprint needed to beat Navarrete. Just as it is important to know which punch to throw at what point in the ring, a boxer must know when to deal and when to fold. Team Dogboe made a bad call at a really bad time.

In boxing, you have a target up your backside with every boxer in your division aiming for the bull’s eye the moment you become a champion. In essence, your job becomes harder once you hold that piece of horse leather with the shiny metal plate in front. It’s been an eventful 13 months for Isaac Dogboe. The lessons are many and at 24 there are still many pages left untouched and untainted by this indelible ink of life. Question is will the next page contain a glorious fairytale or the script of another horror show? His second showdown against Emanuel Navarrete was touted as make or break. He lost. Will the storm of this defeat wreak havoc to a man whose storm had the world talking?