The last time Webster Hall opened its doors for a rap concert was August 2017, when Action Bronson took center stage with his “End of an Era” concert. His strong performance was fueled by emotion as fans sadly counted down the closing minutes of one of New York’s renowned venues and bid farewell. After going through several renovations over the last two years, this past Friday (April 26), Webster Hall reopened for Jay-Z’s B-Sides 2 concert.

For Hov enthusiasts, Friday night served as a sacred chapter in the storybook career of Jay-Z. While his pristine résumé boasts gaudy stats (13 solo No. 1 albums, 21 top 10 Hot 100 hits), this night wasn’t about his club-burning singles. In 2015, Terminal 5 was home to Hov’s first B-Sides concert, where he rattled off deep cuts from his lauded catalog such as “Where I’m From,” “So Ghetto” and “44 Four’s,” a remix to his 1996 Reasonable Doubt standout cut “22 Two’s.” He even reunited with his Roc-A-Fella team, which included Memphis Bleek, Beanie Sigel, Freeway and the Young Gunz for a stirring rendition of “You, Me and Her” and “What We Do.”

Four years later, a jolt of warmth and excitement fed Hov’s eager devotees as they transversed through the city’s rainy streets for this enchanting experience. With DJ Clark Kent on the 1’s and 2’s, fans bonded over their top Jay-Z B-side records and debated about whether or not Kanye West would saunter onto the stage to bury the hatchet with his past collaborator as Ye’s ”Can’t Tell Me Nothing” and ”Crack Music” rang through the cavernous space. Though Yeezy was nowhere in sight, that surely didn’t dampen the audiences’ two-hour long experience.

After a two-and-a-half hour wait, Hov took the stage at 10:30 p.m. Unlike his first B-Sides concert, the Brooklyn virtuoso cleaned up nice, draped in a dark blue suit with a heavy gold chain roped around this neck. With Kingdom Come’s intro “The Prelude” trickling through the speakers, Hov gauged the room’s temperature, approached his mic and delivered a lyrical assault over his 2006 track. This time around, Jay’s mission was to delve deeper inside his prolific catalog, and the end-result proved priceless. A sea of oohs and aahs blanketed Jay as he biked his way through “Young and Gifted” and “Don’t You Know.”

“Oh, he in his bag tonight,” yelled one zealous fan as Hov raced his way into “Lucifer.” Smiling ear-to-ear, Jay rapped the West-produced track with elastic ease, stretching out every bar for extra emphasis. When he walked his way through his Blueprint 2 record “Some How, Some Way” at the tail-end of the song, Hov elected to go in a different direction. After telling his longtime engineer and DJ Young Guru to lower the bass of the track, Hov went into a two-minute long freestyle dedicated to Nipsey Hussle, who was shot and killed outside of his Marathon Clothing store last month.

The ambitious verse was peppered with gems on financial liberation: “Gentrify your own hood before these people do it / Claim eminent domain and have your people move in / That’s a small glimpse into what Nipsey was doing / For anybody still confused as to what he was doing,” rapped Jay.

The fun didn’t stop there. After his woke freestyle, Hov kept his foot on the gas, wheeling his way through “So Ambitious” and “Allure,” with the latter earning deafening cheers from the crowd. Just when you thought Hov had the room’s energy level at 100, he shattered that number when he brought out Nas and later, Cam’ron and Jim Jones.

The former made his surprise stop during Hov’s “Success” verse. Like his rap counterpart, Nas entered the stage in an upscale suit and swaggy sunglasses. The 10-minute exchange between Nas and Jay-Z was a scene that rap purists from the ’90s would have died to witness firsthand. The two played hot potato with the flow from Nas reciting “The World Is Yours,” to Jay dishing out “Dead Presidents” with the Queens MC wrapping things up on “New York State of Mind.” The back-and-forth exchange between New York’s biggest rap titans drew the loudest reaction from the crowd up until Jay later called out Cam’ron for “Welcome to New York City.”

No one expected Killa Cam to walk onto the stage considering his well-documented fallout with Jay in the mid-2000s, which later turned into a muddy spat on wax. Once Cam and Jay saluted each other with a dap of recognition, it was off to the races. Each sprinted through their verse with vigor, soaking in the crowd’s enthusiasm. Things intensified when the beat for Cam’ron’s “I Really Mean It” dropped and Jim Jones made his entrance. Nostalgia flowed through the raucous crowd once Cam uttered the song’s opening lines: “Y’all n—-s dreamed it, I’ve seen it / Body warm, heart anemic,” with the crowd responding back: “I really mean it!” 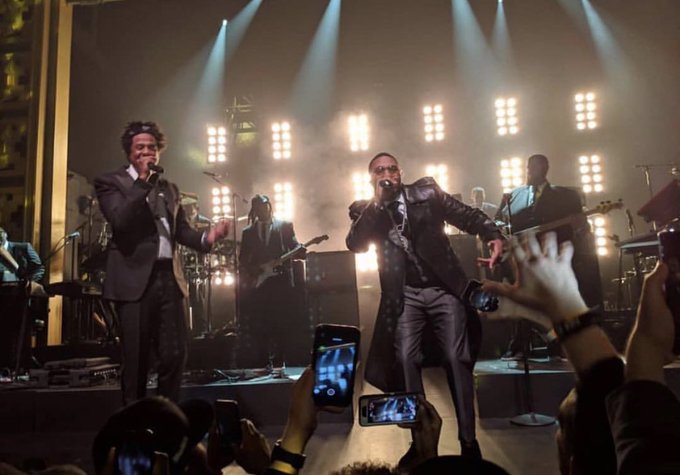 Jay’s decision to bring out Cam’ron left attendees stunned as many of them tugged away at the arms of the person next to them in awe. “Nas is my brother, Cam is my brother,” said Hov following Dipset’s thunderous set. As fans feverishly gasped for air, it was back to business for Jay, who performed the “Black National Anthem” “PSA.” Fans in need of Hov’s soulful records were catered to as well when he strung together a quick twosome of “Never Change” and “Dear Summer.”

“I knew the Avengers were playing across the block, but they ain’t even real,” quipped Hov, who was referencing the Marvel comics movie that released in theaters on Friday.

For hip-hop’s Superman, performing 30-plus tracks, extending an olive branch to one of his most villainous foes and handing out champagne flutes to audience members in-between performances is something comic book writer Jerry Siegel couldn’t have even penned for his most formidable character. On this night, Hov transcended excellence. As a jazzy rendition of “Thank You” played in the background, he was gracious of his fervent supporters who rapped along with him until 12:30 in the morning.

“The music I make is from my heart,” said Hov. “Right, wrong or indifferent. You know, I’m not a perfect guy. So the music I make is just me, of what I been through and what the people around me have been through. Even my flaws, I put them out there. You can learn from my flaws, or you can connect to my flaws. Maybe even take it further than when I’m trying to take it.”

Before Hov chucked the peace sign, he handed a bottle of Ace of Spades champagne to a lucky fan in the crowd and exited the stage with another superior performance under his belt.