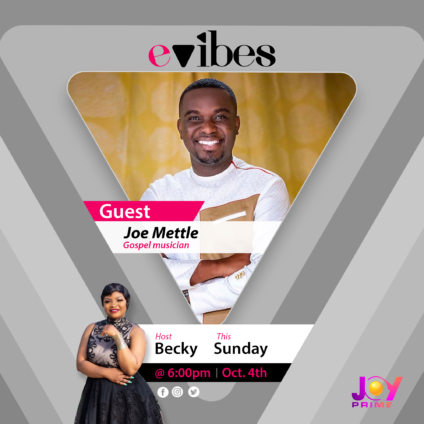 Father of award-winning gospel musician, Joe Mettle has revealed his favourite song on his son’s catalogue.

Emmanuel Mettle says his most preferred song among all of Joe Mettle’s compilation of songs is ‘Ɔnwanwani’.

This same song won Joe Mettle the Vodafone Ghana Music Awards ‘Artiste of the Year’ in 2017, breaking the jinx to become the first gospel artiste to win that award.

Speaking to Becky on the yet to be aired  E-Vibes show this Saturday, Emmanuel Mettle did not hesitate to sing a few lines from the song.

Joseph Mettle, the uncle of Joe Mettle also revealed his favourite song as ‘Bo No Ni’.

According to Joseph Mettle, his nephew has excelled on his career path as a gospel musician because of his relationship with God.

“What helped him most is that he started with God, you see, if you know God, He will direct your footsteps.” He said.

Get more of these revelations on E-Vibes this Saturday at 8:30 am with a repeat on the same day at 2:00 pm.

Viewers will get the chance to catch a playback on Sundays at 10:00 am and 2:30 pm on Fridays.

Joe Mettle will not only talk about his dealings but also show viewers the environment and personalities that have influenced his career.

The E-Vibes show strives to evoke the nostalgia in Ghana’s celebrities through the setting of the interview; capturing their rise, the memories they made on their way to the top with the hope that their unique stories to help shape the younger generation.

DISCLAIMER: The Views, Comments, Opinions, Contributions and Statements made by Readers and Contributors on this platform do not necessarily represent the views or policy of Multimedia Group Limited.
Tags:
Gospel Music
Joe Mettle