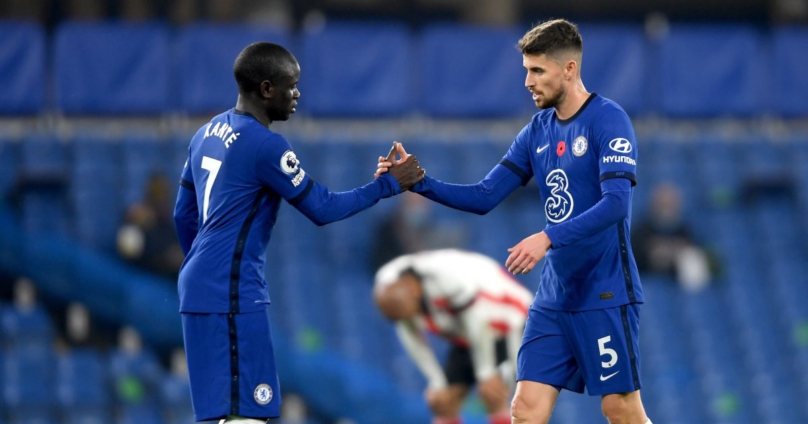 UEFA has confirmed the nominees for the Men’s Player of the Year award, with Chelsea duo Jorginho and N’Golo Kante having been joined by Manchester City star Kevin De Bruyne on the list.

Barcelona trio Jennifer Hermoso, Lieke Martens and Alexia Putellas have all been nominated for the UEFA Women’s Player of the Year, while Pep Guardiola, Thomas Tuchel and Roberto Mancini are the three Coach of the Year nominees.

As for the Women’s Coach of the Year, Lluis Cortes, Peter Gerhardsson and Emma Hayes are all in the running for the award. The winners will be revealed at the 2021-22 Champions League group-stage draw ceremony on August 26.

Who are the UEFA Men’s Player of the Year nominees?

Chelsea duo Jorginho and Kante are two of the nominees for the UEFA award after enjoying a stellar 2020-21 campaign that saw the Premier League club lift the Champions League.

Both players started the Champions League final win over Manchester City, with Kai Havertz’s first-half strike proving the difference between the two sides in Portugal.

Tuchel’s side also secured qualification for Europe’s premier club competition for the 2021-22 campaign courtesy of their fourth-placed finish in the table, while they would also lift the UEFA Super Cup by beating Villarreal.

In what was a remarkable year individually for Jorginho, the 29-year-old would also go on to win the European Championship with Italy.

The third nominee for the men’s award is Manchester City midfielder De Bruyne.

Despite a season disrupted by injury, De Bruyne played a pivotal role to help City win the Premier League title, with his exploits seeing him awarded the PFA Player of the Year award for the second season in a row.

Who are the UEFA Women’s Player of the Year nominees?

The Women’s list of nominees is comprised solely of Barcelona players.

Hermoso, Martens and Putellas have all been recognised during a season that saw Barca Femeni storm to a 4-0 win over Chelsea in the Women’s Champions League final.

The trio all started that match in Gothenburg, with Putellas getting on the scoresheet, while they also won the Women’s Primera Division title and the Copa del Reina, where they beat Levante in the final.

Who are the UEFA Coach of the Year nominees?

As for the Men’s Coach of the Year, Tuchel, following his exploits with Chelsea after replacing Frank Lampard, is up for the award along with Manchester City boss Guardiola.

The Women’s Coach of the Year nominees include, as expected, former Barcelona head coach Cortes after he steered the Catalans to a treble-winning 2020-21 season prior to resigning from the role.

Sweden women’s national team boss Gerhardsson is also included on the list, with his side earning a silver medal at the Olympics, narrowly losing the final to champions Canada on penalties.

And the women’s nomination pool is completed by Chelsea head coach Hayes, with the Blues winning the Women’s Super League for the second season in a row, as well as claiming League Cup glory.