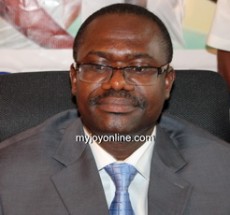 Chairman of the Jospong and Zoomlion Groups, Dr. Joseph Siaw Agyepong is appealing to the media to go slow on local businessmen and women as way of encouraging local investment.

Speaking to senior news editors in the country, he noted that loads of wealthy Ghanaians have chosen to invest their moneys either outside the country or into treasury bills and bonds because "they are afraid that the Ghanaian media will not spare them if they make a mistake."

Local businesses Jospong/Zoomlions Groups and the Agams Groups among others were caught in a string of scandals, which have become infamously known as the "GYEEDA-SADA-Subah rot", because they took millions of state money and could not account for it.

Dr. Agyepong noted that he and the CEO of Agams Group, Roland Agambire took the risk and did the GYEEDA and SADA projects at a time when all the wealthy Ghanaians who were contacted to do it did not want to.

"It was a sacrifice we made to help our country – we did not intend to create a scandal, but genuine mistakes do happen and when they do you (the media) can walk to us and advise us instead of bashing us in public," he said.

According yo him, he has personally met wealthy Ghanaians doing "magic" with their money in other countries and when he asked why they don't come to Ghana they point to the media bashing local businessmen suffer as their main reason.

"I also know some Ghanaian businessmen in this country who prefer to do things on the quiet because they feel the slightest mistake the media finds with them they will be dragged in the mud," he said.

Dr. Agyepong said whereas he does not condone covering up of rot in business practices, the media should appreciate the fact that until recently, local businesses did not have the chance to do big business in Ghana so the few of them who took the risk are now learning the ropes.

He noted, for instance, that currently the local content component of the oil industry is being run by foreigners hiding behind locals because the requirement is difficult for the locals to meet.

"So if a Ghanaian businessman goes in there, he is likely to make some mistakes and when it happens it would be better to find a way to help him negotiate the curves instead of burying him alive," he said.

Touching on the World Bank ban on Zoomlion in Liberia, he explained that it was a matter of a staff taking unauthorized measures, but once he found the mistake, he admitted to it and accepted the sanction.

"But now we are out of it and we are expanding and providing World Bank sponsored services not only in Liberia but in parts of Africa," he said.

Dr. Agyepong said in other countries the local media make it a point to support local businesses to grow and provide jobs so he is urging the Ghanaian to consider doing same for Ghanaian businesses.

He assured the media of making himself available for clarification on any issues of concern to them.