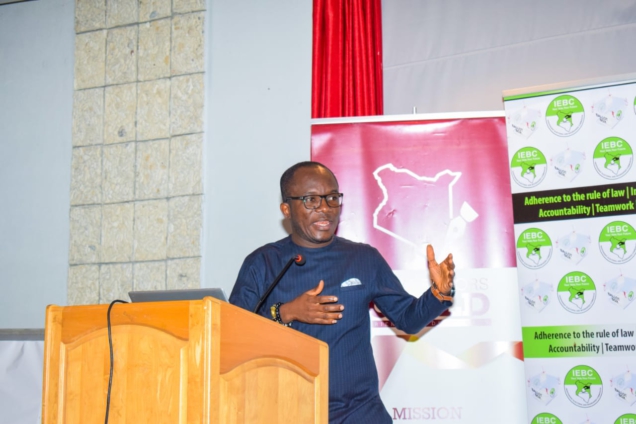 Ghana’s election headquarters, JOYNEWS, is assisting Kenyan media with expertise on election results reporting ahead of their general elections on August 9.

Evans Mensah, Editor and Head of the Political Desk, has in the last few days been in Kenya working with their Independent Elections and Boundaries Commission through the Electoral Law and Governance Institute for Africa to assist Kenyan media to build capacity for accurate election results collation and transmission.

Since 2007 when post-election violence destabilised Kenya, its media had shied away from playing any critical role in election results collation and transmission.

In Ghana, the duty of the Electoral Commission to collate and declare results is complemented by independent media results collation and calling of elections.

But in Kenya that task is done solely by its Independent Elections and Boundaries Commission with a limited role for the media.

“Unlike in Ghana where the media has a role in results transmission, in Kenya, there is only one source of election results and that is the commission.

“So if it is doubted then we don’t have any other source of verification”, says Executive Director of Electoral Law and Governance Institute for Africa, Felix Odhiambo.

The President of the Kenya Editors Guild, Churchill Otieno says the media just lost the will and the trust of the people following the 2007 post-election violence.

“The elections that then followed have seen the media being pushed to the side so that it was seen that results management and the announcement was the sole mandate of the commission. But the last two general elections have shown us that by not reporting on results we are abdicating our duty as media,” Mr Otieno noted.

The current electoral commission of Kenya is desperate to work with the media to change this with another general election due in a few weeks on August 9, 2022.

Wafula Chebukati, the Chairman of the IEBC of Kenya said, “the media has a choice to make either to play smart and work with the commission to help it discharge its duties or the media then can choose to sit on the fence. It still has a choice to make. But on March 4, we made a choice that we must work together”.

So, facilitated by the Electoral Law and Governance Institute for Africa or ELGIA, the commission has been engaging Kenyan media editors and managers at a consultative workshop.

JOY NEWS has become an essential partner in this endeavour with decades of experience to share on how to accurately report, collate results and call elections.

For Mr Odhiambo who heads ELGIA, the JOY NEWS experience will be critical in assisting the media in Kenya build its capacity and embrace the fact that it is possible.

He said, “part of the reason why we were privileged to invite the electoral commission of Ghana and JOY NEWS to help share that perspective. To help share a long history of a close collaboration but also a long history of having a role, especially in the case of JOY NEWS of having a role in the election results management but also calling elections”.

There is a determination on all sides to have JOY NEWS and Ghana’s electoral commission assist with the process beyond this fruitful two-day workshop.

“Now for the last two days one of the major take away and one of the issues that have really been appreciated by the participants: the electoral commission and the media is that perspective that has been shared from Ghana.

“Even in the communique that has been released it has been acknowledged and the chairman of the electoral commission has made a firm commitment to inviting the electoral commission of Ghana and JOY NEWS to continue sharing their perspectives and to help put together a framework that the media can use in the course of reporting the 2022 general elections,” Mr Odhiambo noted.

The Commission’s work in supervising eight general elections since 1992 was celebrated and the lessons shared for the benefit of the Electoral Commission of Kenya.

On August 9 2022, Kenyans will once more go to the polls to elect the President, members of the National Assembly and Senate, county governors as well as members of the 47 county assemblies.

The presidential contest is widely seen as a two horse race between Raila Odinga and current Vice President, William Ruto.