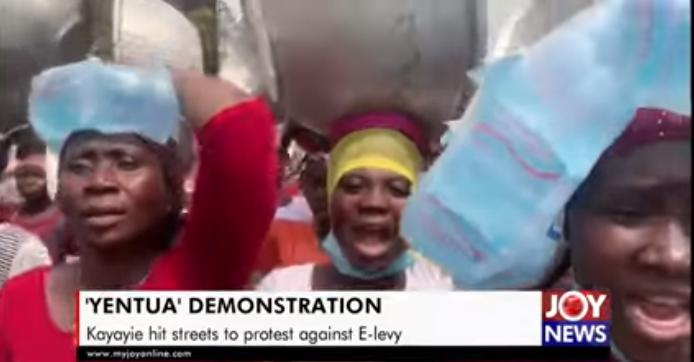 The Youth Wing of the National Democratic Congress (NDC) on Thursday morning hit the streets of Accra to protest the passage of the Electronic Transactions Levy (E-levy).

The group was joined by head porters also known as the ‘Kayaye’ Coalition of Concerned University Students (CoCUS) among others.

According to the ladies, the introduction of the E-Levy of 1.75 per cent will be a financial threat to their pockets.

One of the traders who carried a bag of sachet water throughout the protest stated that “We won’t pay…we the use mobile money a lot and any tax on it won’t favour us.”

Shouting on top of their lungs, they bemoaned the difficulty they would face in sending monies to their families in the north should the levy be implemented.

Some noted that they are the breadwinners of their family, therefore, would have to pay more once the tax comes into force.

“I send money to my mother to cater for the needs of my children. If I pay the 1.5 E-Levy and pay the mobile money charges, I would have nothing left,” one of the Kayaye said.