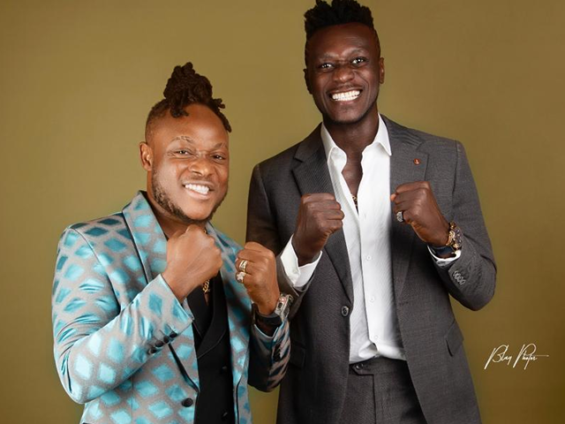 Music group Keche, made up of Andrew and Joshua, has finally disclosed why they have stood the test of time when it comes to active music groups in Ghana.

Over the years, a good deal of music groups both local and international have had issues, causing them to split up and focus on their solo projects.

Even twin Nigerian music stars, P Square, took a long hiatus until they smoked the peace pipe last year. Popular Ghanaian trios Praye, 4X4 and even VIP took a bow out of the music scene at a point in their careers.

Speaking on Adom FM’s Ofie Kwanso show, the duo revealed what has pushed them for over a decade in Ghana’s music circles.

Speaking on the group’s longevity, Keche Joshua confirmed that even when they have misunderstandings, they make sure to put the brand first.

“I started as a single act, then I was called Joe Shine. But God is wise and since He brought Andrew to my way the whole world has accepted us and us going solo means we have disappointed people. God has a reason for putting us together. People don’t believe it’s the same Keche 10 years ago,” he said.

He confirmed there are moments that they fight before events, but they let sleeping dogs lie the moment they have to mount podiums to entertain their fans.

“We’ve been on stage when we were not talking, but we performed well. Andrew is quick-tempered a lot. Sometimes we don’t talk for weeks and all that, but when the show comes up we will perform together. No matter what, we don’t want to disappoint God and our fans,” Keche Joshua added.

Meanwhile, Keche Andrew said the brand is the only way they can put food on their table, hence, the determination to support it at all costs irrespective of their differences.

“Even twins P Square broke up, and that should tell you the job is not easy, but if we work together, and we don’t talk, we should know we are losing money. To the groups out there, you have to respect the brand, because it’s not easy to sell it for people to support you.”

“Sometimes we might not be talking, but we don’t let the people know. We don’t let our differences take so long,” he explained.