Kenya has exported its first batch of oil as President Uhuru Kenyatta flagged off the crude shipment from the port of Mombasa on Monday morning.

It is being described as a historic day and an important step on the way to the full exploration and development of oil in the East African nation.

This is an experimental phase to test the country’s crude oil before full production and exportation begins in around 2024. 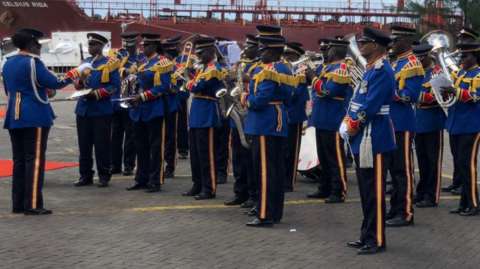 A brass band formed part of the official ceremony

Oil bids were received from firms in Asia and Europe, but the joint oil production consortium, led by explorer Tullow Oil, awarded the contract to ChemChina. 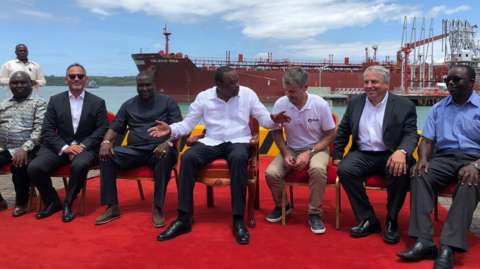 The crude was transported 850km (528 miles) by road from the country’s north-western oil fields in Turkana to Mombasa.

Kenya currently does not have an oil pipeline in place.

A plan to build a joint pipeline with Uganda failed after Kampala opted to partner with Tanzania.

Tullow estimates that Kenya’s fields in Turkana hold up to 560 million barrels of oil and expects to produce up to 100,000 barrels per day from 2022.