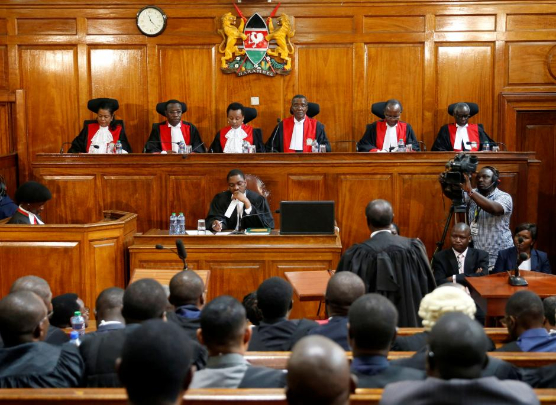 When I saw how the Ghana Supreme Court had dawdled over the petition arising out of the 2012 presidential election – the Court took eight solid months to come to a conclusion! — I wrote an article to draw the attention of the then Chief Justice, Mrs Justice Woode,  to the fact that the Kenya Supreme Court, some of whose judges had been mentored by her, had taken only two weeks to reach a conclusion on a similar petition presented to them for adjudication.

On Friday 1 September 2017, the Kenya Supreme Court again surprised the world: it decided that the Kenya presidential election held on 8 August 2017 (in which the country's incumbent President, Mr Uhuru Kenyatta, was opposed by Mr Raila Odinga) was marred by “irregularities” and “illegalities” and  was therefore cancelled. A new election should be held 60 days from the day of the judgement, the Supreme Court said.

This was the first time in Africa's history that the Supreme Court of any nation on the continent had upheld an election petition filed against the person declared winner by the country's Electoral Commission.  As the Ghana election petition of 2013 had demonstrated, no matter how painstaking [remember the endless tussle over "pink sheets"?] the arguments advanced by the “loser”, it was more than likely that the “incumbent” against whom the petition had been brought, would be the one to walk out of the court with his head held high.

Gabon was the latest country in which such a scenario had been played out in recent months. But such countries as Zambia, Zimbabwe and Uganda have also managed to hold elections whose results could have been largely forecast by a blind man throwing coloured pebbles into the air and deciding the results on the basis of where the different pebbles fell!

The Kenya case is of particular interest to us in Ghana because the election was annulled on almost the same grounds as the NPP candidate, Nana Addo Dankwa Akufo-Addo, had used to try and prove to our Supreme Court judges that our 2012 election was flawed by irregularities. The Kenya Chief Justice, Mr Justice David Maraga, agreed with the opposition that the Electoral Commission had failed, neglected or refused to conduct the election of 8 August 2017 in accordance with the constitution and the electoral law. He said there had been “irregularities and illegalities” in the transmission of results and that this affected the integrity of the election. Therefore the election was null and void and a new election should be held in 60 days. See

To his credit, Kenya's incumbent President, Mr Uhuru Kenyatta, made a nation-wide broadcast immediately after the judgement, in which he told Kenyans that although he disagreed with the judgement, he would obey it. He urged his supporters to do the same.

I must say I was not at all surprised by the Kenya Supreme Court decision. The Kenya Electoral Commission appeared to be insensitive to pubic opinion in the period immediately preceding the election. The Commission's Information and Communications Technology (IT) expert, Mr Chris Msando, was abducted and tortured before being brutally murdered,  towards the end of July 2017 – that is, just a few days to election day. But apart from asking the Government to beef up security for his staff, the chair of the Electoral Commission seemed to have taken the incident in his stride.

A more street-wise Electoral commission chair would surely have suspected that if the IT expert had been abducted and tortured, then the secrets of the Commission concerning how its systems work, could have been compromised? Someone who had prised secrets out of the dead man could enter the system and hack it, not so?

Such a conclusion should have made the Commission chair postpone the election, order new IT systems, and allow his staff to get used to it before using it for the election. But he did neither, and yet when Raila Odinga's party complained that its intelligence showed that the existing system had indeed been hacked, he ignored the complaint.

It is to be hoped that the Kenyan populace will listen to the advice given to it by Mr Uhuru Kenyatta, conduct the new election campaign peacefully, and hold a clean election whose results can be accepted by every Kenyan as the genuine one desired of his people.

One question the Kenya situation raises is this: of what use are “Election Observers” from foreign countries who  flock to Africa to watch our elections and who very often declare them to be “free and fair”, while the African people  themselves are crying in pain that the elections have been rigged or otherwise been marred by dishonest officials?

In the Kenya case, for instance, the observers included such luminaries as Mr John Kerry, former United States Secretary of State, and Mr Thabo Mbeki, former President of South Africa. They, together with a delegation from the European Union, declared that they were satisfied that the election was “free and fair!” Yet the Kenya Supreme Court has now ruled that it was not free and fair and when it makes its detailed reasons for reaching that conclusion known, it would be seen that numerous   “irregularities and illegalities” had occurred during the election.

I do not think that Election Observers should be barred from coming to watch African elections. But if they do come, they should at least do something really useful – such as insisting on being allowed to MONITOR  ALl   the PROCESSES electoral officials engage in during an eection and why they do it.

The African people are simply  tired of crying over spilt milk all the time, whenever  an election result is declared.