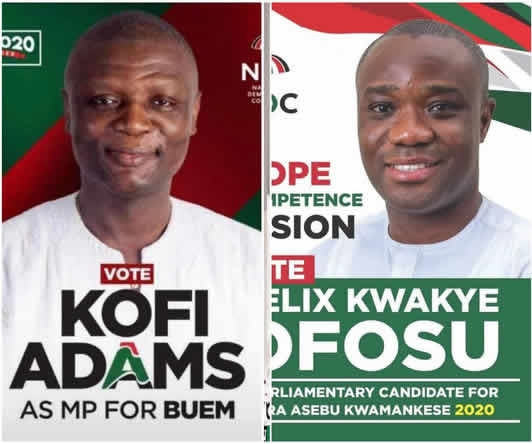 New parliamentary candidates, Kofi Adams and Felix Ofosu Kwakye, have both expressed confidence to emerge winners after the upcoming primaries and going ahead to secure their seats for the National Democratic Congress (NDC) during general elections in 2020.

Mr Ofosu Kwakye, a former Deputy Minister of Information is hoping to reclaim the Abora Asebu Kwamankese seat for the NDC after winning IT in the August 24 primaries.

That constituency was considered an NDC-stronghold for many years until the governing New Patriotic Party (NPP) won it in 2016. According to Ofosu Kwakye, the NDC has temporarily handed the seat to the NPP, confident that he will unseat the NPP candidate, Elvis Morris Donkoh, in the next general elections.

“Due to some internal wranglings we relinquished the seat by a slim a margin…Morris Donkoh won by just 1,000 votes. The NDC has won it for four occasions, the NPP has had it twice…it is an NDC stronghold and all we need to do is to close our ranks,” Ofosu Kwakye said Tuesday evening on PM Express, a current affairs programme on the Joy News channel on MultiTV.

Kofi Adams, a former National Organiser of the NDC, also said on the show that his political experience will come to play in securing the Buem seat in the Oti Region for the opposition NDC after beating NDC candidate, Daniel Kwesi Ashiamah at the primaries.

Kofi Adams and Felix Ofosu Kwakye are among the youthful candidates the NDC is fielding in the legislative contest in the party’s bid to appeal to young voters.

In the video link below, Kofi Adams and Felix Ofosu Kwakye justify why they are the best candidates for the seats they aspire for.

DISCLAIMER: The Views, Comments, Opinions, Contributions and Statements made by Readers and Contributors on this platform do not necessarily represent the views or policy of Multimedia Group Limited.
Tags:
Election 2020
Felix Kwakye Ofosu
Kofi Adams
NDC