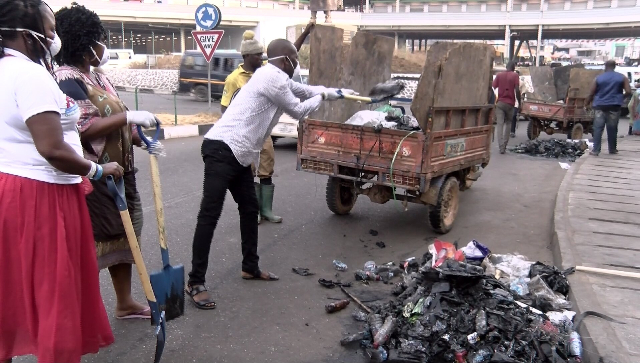 Kumasi Metropolitan Assembly (KMA) has acknowledged the positive impact its partnership with The Multimedia Group has made on making the Garden City cleaner.

Though City Mayor, Osei Assibey–Antwi acknowledges there is more work to be done, he says the partnership is making a change in the sanitation fight.

The commendation comes as  Luv and Nhyira FM-led sanitation campaign mobilised residents to undertake a cleanup exercise which saw principal streets of Kumasi being cleared of filth.

“This should not be the end of the show…I am urging The Multimedia Group continue…your partnership with KMA is yielding positive results and everybody is seeing it,” he said.

“Cleanliness is next to godliness and if we all abide by it, then the SDG will be achieved because we must ensure that we have clean environment and clean water, then we will be living longer.”

Mr Osei Assibey-Antwi has called on other media houses to get involved in the sanitation campaign.

“I am also calling on all the other media houses to get on board the exercise.”

Volunteers and joined the staff of Luv FM and Nhyira FM as well as officials of  KMA with some reporting as early as 5 a.m. to start the exercise.

Environmental Health Director at KMA, Isaac Basanye reiterated the need for periodic clean-up exercises as education is intensified to sustain the campaign.

“With what I have seen today, I think we need to do a periodic clean-up exercise and again to do some education. Often the question is, what is the sustainability of the whole thing,” he said.

“So we need to educate the general public to know that we need to keep our environment clean to ensure that we get a healthy life,” he added.

He is optimistic about the KMA-Multimedia Group partnership which he says is gradually changing people’s behaviour.

“I am very impressed by what has happened today. In fact, when you go to the Central Business District, the number of traders that came for the clean-up is very massive.

“So I think with Multimedia Group, our partnership can work to change people’s behaviour,” he said.

Some of the traders who spoke to Luv FM explained how happy they were to participate in the exercise.

According to them, though they try to clean the gutters once in a while, they acknowledge a periodic one like Saturday’s exercise would make an impact.

The exercise which coincided with Independence Day clean-up exercise also attracted the Fire and Prison Services as well as other state institutions.

Sanitation campaigner, Patricia Kwarteng, who has been educating drivers and commuters at the Sofoline Lorry Station also joined the exercise.