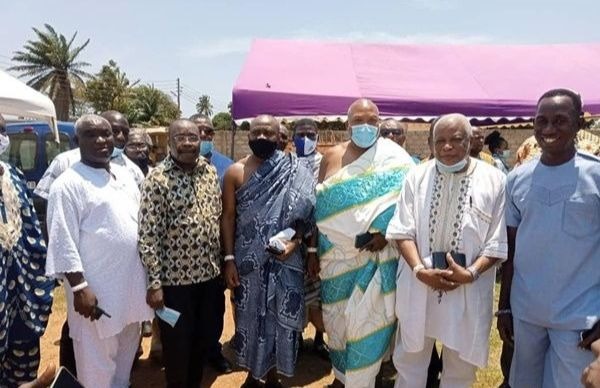 A sod-cutting ceremony and customary rites have been performed for the redevelopment of the La Wireless Civil Aviation lands following the signing of a Memorandum of Understanding (MoU) between government and the Traditional authorities.

The land in question was leased to the British Colonial Administration in 1948 by the La Traditional Council for a period of 99 years.

However, the lease agreement was due to expire in 27 years.

The government, consequently, signed the MoU with the La Traditional Council, the original owners of the land, for the renewal of the lease agreement for another 99 years.

Under the new agreement, the La Traditional Council is ceding portions of the land to the government for developmental purposes.

Additionally, a portion of the land has been ceded to the Ghana Civil Aviation Authority since it has permanent structures on that particular land.

The Lands Commission would oversee the rest of the land belonging to the State.

Nii Adjei Koofeh IV, La Shikitele (Kingmaker) and Supreme Head of Nmati Abonase, speaking in a media interview at the ceremony, held at La Wireless in the La Dadekotopon Municipality, on Monday, gave the assurance that the traditional authorities would put the land to good use.

He said the traditional authorities would engage in transparent transactions, which would take the interest of the people into consideration.

“We’re going to use parts of the land for developmental works in the town.

There are rumours that the chiefs have entered into various arrangements and we have sold all the land and shared the money,” Nii Koofeh emphasised.

“We want to assure the people that we’re not going to do anything untoward and any arrangements we enter into will be very transparent and the people will benefit.

And so the chiefs are not going to hijack the land and use it for their own personal gains.

“The ceremony was witnessed by the Greater Accra Regional Chairman of the Lands Commission, Mr Alex Quaynor and other government officials.