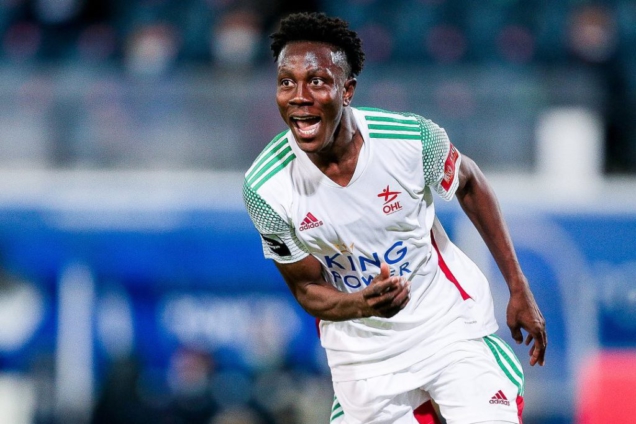 Leicester City must be excited with the current form of their Ghanaian attacking midfielder Kamal Sowah, who is having an impressive season in the Belgian top-flight with OH Leuven.

Leicester loaned Sowah to their sister club OH Leuven, prior to the start of the season. This was after he gave a positive account in his first two loan spells.

Sowah was playing for the Leicester U-23 team, however, they saw the potential and decided to expose him to senior team action and he has not disappointed.

This season, he has been in great form in front of goal and has already eclipsed his best scoring season after finding the net for the seventh time on Wednesday night.

His goal ensured Leuven snatched a point in a 1-1 draw against Charleroi, a result that maintains Leuven’s impressive sixth position in their first top-flight season since 2016. Aside the seven goals, he has supplied four assists after 24 games.

This is an improvement to last season’s record of eight-goal contributions in 29 games for OH Leuven in the second-tier league.

Belgian giants Club Brugge have been trying to sign the 21-year-old, however, Leicester are not interested in selling him because they have plans for him.

Kamal is expected to start in his team’s next game against Beerschot this weekend as they push for a top-four place.

DISCLAIMER: The Views, Comments, Opinions, Contributions and Statements made by Readers and Contributors on this platform do not necessarily represent the views or policy of Multimedia Group Limited.
Tags:
Belgium
Kamal Sowah
Leicester City
OH Leuven