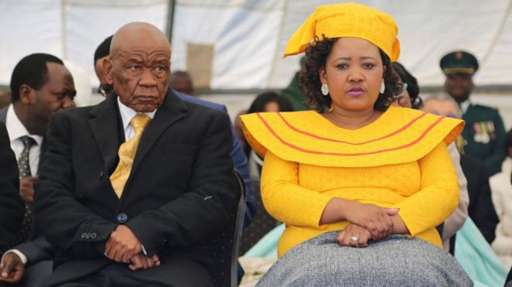 In a damning court affidavit, the police in Lesotho say they have evidence that former Prime Minister Thomas Thabane and his current wife Maesaiah Thabane paid assassins to kill Mr Thabane’s estranged wife in 2017.

Lipolelo Thabane was shot dead on the eve of Mr Thabane’s swearing in as prime minister.

The police statement is one of the documents filed in the Maseru High Court which the police will be using to oppose Mrs Thabane’s bail application.

Mrs Thabane, who has been charged with murder, has been in custody since last week. Her lawyers will argue that she should be granted bail to care for her unwell husband.

She has pleaded not guilty to the charges.

Mr Thabane – who has denied any involvement in the murder – was forced to step down last month amid the murder allegations.

He is yet to be charged, but in the latest papers police allege that he identified the home of his estranged wife to the hit-men.

The police also say the former prime minister and his wife agreed to pay the alleged killers a total of $180,000 (£142,000) – which was to be paid in instalments. A down-payment of $24,000 had already been paid, according to the affidavit. One of the hit-men will be testifying as key witness for the state.

According to the police, Mr and Mrs Thabane wanted his former wife, Lipolelo, dead, so that his current wife could assume the role of first lady.

Shortly before her death, Lipolelo Thabane won a court battle confirming that she was the rightful first lady – despite being in the middle of divorce proceedings – and deserved all the perks that came with the position.