Jurgen Klopp may be in the midst of taking Liverpool to Premier League glory, but that has not stopped him responding to a letter from a fan – of rivals Manchester United.

As part of a school project, 10-year-old Daragh Curley wrote to the German manager, asking him to help out his beloved team by losing a few games.

In his letter Daragh, who is from Ireland, wrote: “Liverpool are winning too many games. If you win nine more games then you have the best unbeaten run in English football. Being a United fan that is very sad. 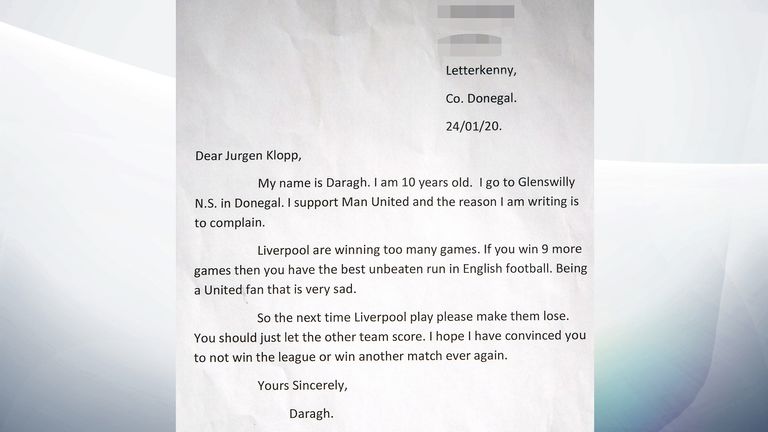 “So the next time Liverpool play please make them lose. You should just let the other team score. I hope I have convinced you to not win the league or any other match again.”

After sending the letter, much to Daragh’s surprise, he received one back from Klopp, who told him that despite his passion, he would not be able to agree to the request.

In his response, Klopp wrote: “Unfortunately, on this occasion, I cannot grant your request, not through choice anyway.

“As much as you want Liverpool to lose it is my job to do everything that I can to help Liverpool to win as there are millions of people around the world who want that to happen so I really do not want to let them down. 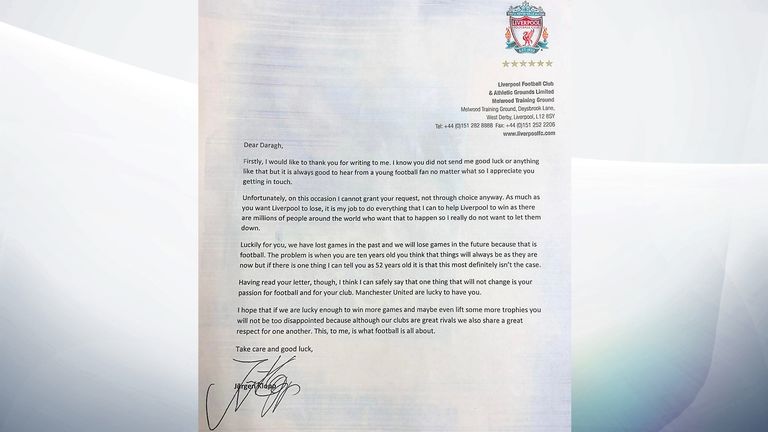 “Luckily for you, we have lost games in the past and we will lose games in the future because that is football.

“The problem is when you are 10-years-old you think that things will always be as they are now but if there is one thing I can tell you as 52 years old it is that this most definitely isn’t the case.”

“Having read your letter, though, I think I can safely say that one thing that will not change is your passion for football and for your club. Manchester United are lucky to have you.

“I hope that if we are lucky enough to win more games and maybe even lift some more trophies you will not be too disappointed because although our clubs are great rivals we also share a great respect for one another.

“This, to me, is what football is all about. Take care and good luck, Jurgen.”

Daragh’s dad, Gordon, said he admired the Liverpool manager and that his son “couldn’t believe it” when he got the letter. 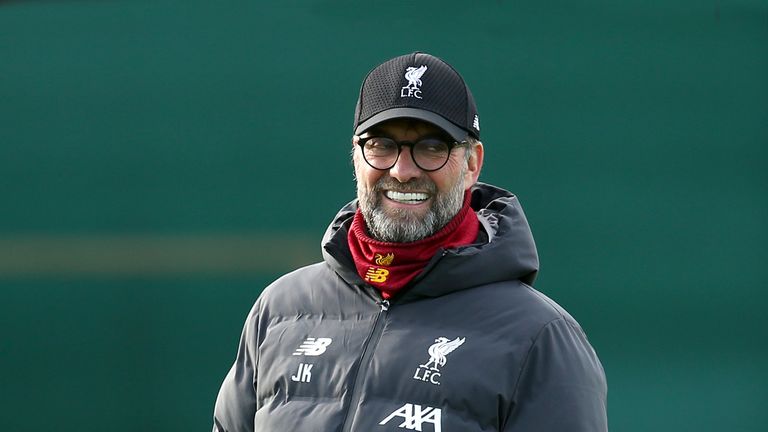 Speaking to the Irish Times, he said: “I’m obviously a Man Utd fan but I have to say I really admire Klopp. What I really liked about the letter to Daragh was that it was personal.

“You could tell by the language that he was using German phrases and that it was a personal response.

“Daragh couldn’t believe it and it was great to be able to bring it into the school and show his teachers and all his friends.”

Responding to a question about the letter at Liverpool’s press conference on Friday afternoon, Klopp told reporters: “I cannot answer all the letters, I get a lot. But it was nice, it was cheeky. We had time that day so I read the letter and I replied.

“I have no problem with supporters of other clubs; it’s a free world so we can choose our club, I don’t think everyone has to be a Liverpool fan.

“I like working for Liverpool and I like the rivalry we have. But I love even more if we can keep that (rivalry) on the pitch. But apart from that they can be happy and we can be happy.

“I hope Daragh is happy, he looked happy in the picture. We try to respond as many as possible.”