Lock your car or lose it; car stealers on the prowl in Canada, U.S - MyJoyOnline.com

Lock your car or lose it; car stealers on the prowl in Canada, U.S 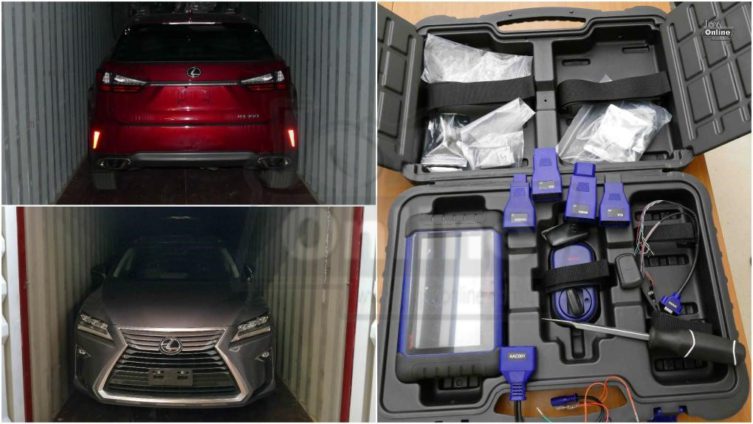 Buying cars in Canada or the United States of America [U.S.A] and shipping them to foreign countries to sell is not a bad deal or bad business at all.

But some people dealing in car sales or business both in Canada and America are getting a big hit in their heads for transacting in what could be described as a lucrative business that shouldn’t be so, but York Regional Police has explained why.

While dealers are getting punished, buyers and users in countries such as the United Arab Emirates [UAE], Nigeria and Ghana who buy and receive cars from Canada and America where the vehicles are shipped from are also getting their fair share of the punishment.

How on earth should buyers, after purchasing the cars in foreign countries, either be arrested or made to return cars they believe were bought through due process?

The York Regional Police has stated that many stolen vehicles have been containerised and are currently at sea, heading to ports in the United Arab Emirates [UAE], Nigeria and Ghana.

“We have targeted these stolen cars from the Greater Toronto Area [GTA] for inspection when they reach the ports, and we expect to recover more stolen vehicles when that is done.”

Their explanation and findings from undercover investigations were contained in a press release issued and signed by Detective Scott Creswell of York Regional Police’s Auto Cargo Theft Unit and was posted on the website on March 18, 2021.

According to Det. Scott Creswell, York Regional Police, has charged 18 people with more than 170 offences following a raid recently that recovered 73 high-end stolen vehicles worth $4.5 million.

He disclosed that eight warrants were executed across GTA and in Brossard, Quebec, as part of a two-month investigation called project Majestic that saw collaboration between York, Peel and Toronto Police forces.

The detectives say they identified a criminal syndicate in the GTA and Montreal area responsible for stealing high-end vehicles from affluent neighbourhoods.

“They would generally scout cars in the evening hours, returning in the early morning hours, they would force entry into the vehicles and then at that point they would be reprogramming the car’s computer to recognise a brand new key fob,” Scot Creswell revealed.

He said the total time taken to steal one vehicle was less than five minutes as the project Majestic focused on the theft of Lexus, Toyota and Honda sport utility vehicles.

The Police say the vehicles were either driven directly to the port of Montreal or loaded into sea containers in Toronto and transported to Montreal by train. They were then loaded onto ships and delivered to buyers in Africa, mainly Nigeria and Ghana or the United Arab Emirates.

Investigations have also revealed that the Police in Toronto have arrested another 16 people in connection with a ring of vehicle finance frauds in the GTA, and a salesperson at a car dealership is included in the arrests, and the accused are facing a combined 431 charges.

Investigators said the fraud was committed by using stolen identities to buy vehicles with falsified financial loan applications. The purchased vehicles were mostly newer or high-end models, such as Mercedes-Benz, Land Rovers, Audi, BMW, Toyota, and Lexus and Ford.

The investigations ran from October 2020 to February 4, 2021, and involved several agencies in Canada and the United States of America [U.S.A.]

According to the Police, 48 vehicles were fraudulently purchased, 19 of which were exported out of Canada and four were recovered as the illegally obtained cars have a total value of $2.85 million.