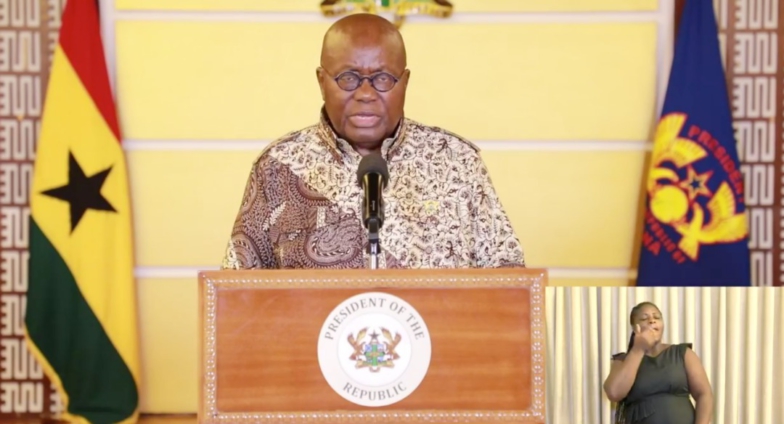 President Nana Akufo-Addo has lifted restrictions imposed on the movement of persons on Greater Accra and Greater Kumasi and surrounding towns as part of efforts to control the spread of the coronavirus.

According to the President, 3-week lockdown has achieved it’s objectives, among which was the need to scale up tracing and testing people who may have come into contact with those who had already tested positive.

Addressing the nation in his seventh televised broadcast since the first confirmed cases of the disease in the middle of March, the President said the decision to suspend the lockdown will take effect from Monday, April 20, 2020.

From more than 60,000 samples tested so far, the president said, “we’ve been able to understand better the dynamism of the virus, mapped out its goegraphic footprint and established current and potential hotspots.”

“We’ve also been able to isolate and educate asymptomatic carriers and thereby help minimize the spread of the virus,” he continued.

Four towns and cities – Accra, Tema, Kumasi and Kasoa – had been placed under a three-week lockdown purposely to hold the spread of the coronavirus.

Additionally, 99 persons have recovered and have been discharged, with 930 persons, who have been isolated responding to treatment either in their homes or in treatment facilities.

“The main reason our country has seen an increase in the number of confirmed cases over the last three weeks is because of the decision we took aggressively to trace and test contacts of infected persons.

“This has enabled us to identify and isolate infected persons, protect the population from further infections, and contain better the spread of the virus,” he said.

The President continued, “Indeed, Ghana is the only other country in Africa to have conducted more than 60,000 tests, and we are ranked number one in Africa in administering of tests per million people”.

Thus, President Akufo-Addo explained: “in view of our ability to undertake aggressive contact tracing of infected persons, the enhancement of our capacity to test, the expansion in the numbers of our treatment and isolation centres, our better understanding of the dynamism of the virus, the ramping up of our domestic capacity to produce our own personal protective equipment, sanitisers and medicines, the modest successes chalked at containing the spread of the virus in Accra and Kumasi, and the severe impact on the poor and vulnerable, I have taken the decision to lift the three-week-old restriction on movements in the Greater Accra Metropolitan Area and Kasoa, and the Greater Kumasi Metropolitan Area and its contiguous districts, with effect from 1am on Monday, 20th April.”

Although the lifting of the restrictions may come as a relief to the many whose livelihoods may have been hit hard following the imposition of restrictions, access to some major sectors remains restricted.

Also, the ban on social gatherings, including religious gatherings, funerals, conferences and parties remain in force. The president also encouraged continuous adherence to social distancing protocols and urged the population to stay at home – unless absolutely necessary to go out. He also urged the wearing of face masks in public places, pointing out that the Health Ministry will soon issue guidelines on this. He also announced the district assemblies will come up with policies and mechanisms to decongest the country’s market centres to ensure social distancing.