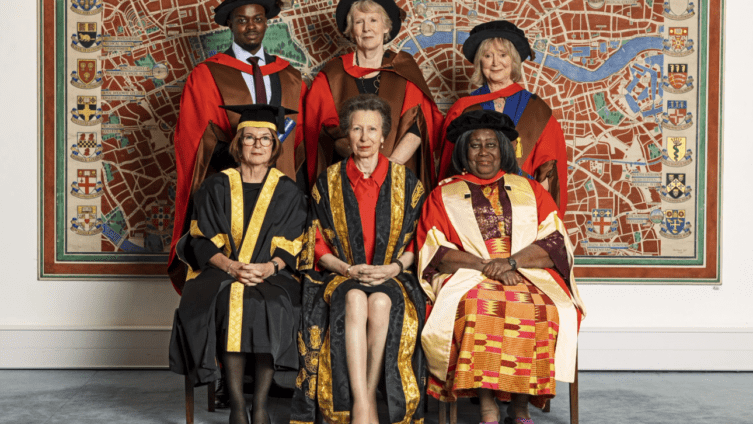 The University of London is delighted to have awarded honorary degrees to Mary Chinery-Hesse, George Mpanga (George the Poet), Margaret MacMillan and Joanna David.

The four remarkable individuals, who received honours last night, have all made substantial contributions to public life and the University in very different ways.

Mary Chinery-Hesse has had distinguished careers in Ghana’s Civil Service and at the United Nations. She is an important voice on economic development issues, a defender of human and women’s rights, and an advocate for African imperatives.

George Mpanga – ‘George the Poet’ is a London-born spoken word performer of Ugandan heritage. His innovative brand of musical poetry has won him critical acclaim both as a recording artist and social commentator and seen his work broadcast to billions of people worldwide. In the summer of 2018, he opened the Royal Wedding of Prince Harry and Meghan Markle with his poem ‘The Beauty of Union’, and in 2019, his audio offering ‘Have You Heard George’s Podcast?’ won a prestigious Peabody Award and 5 Gold British Podcast Awards, including the highly coveted Podcast of the Year. The podcast was described by BBC Radio4 as “a story that could change the world”. George has just launched chapter 3 of the podcast and is now embarking on a PhD.

Margaret MacMillan is a Canadian historian who aims to make history accessible and relevant to the public. Her work focusses on the international history of the 19th and 20th centuries and books include Peacemakers, a study of the Paris Peace Conference of 1919, and War: How Conflict Shaped Us which is based on her BBC Reith lectures of 2018.

Joanna David – After leaving drama school in 1968 Joanna has been working as an actress in theatre, television, film, radio and audio. She has just finished recording a biography of “King George Vth” and is currently working on a television show yet to be announced. She is involved in working with 3 theatrical charities. She is a patron of the Unicorn theatre for children and a trustee of the National Brain Appeal.