Mahama charges chiefs to take a stand against insulting politicians 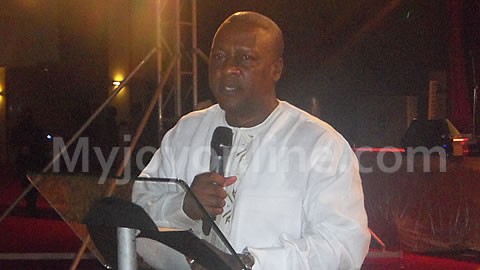 President John Mahama has called on chiefs to be bold in naming and shaming foul-mouthed politicians who engage in mudslinging.

The president explained that it can be appalling and alarming when persons in high positions insult their political opponents.

He was responding to a challenge from the Okyenhene, Osagyefo Amoatia Ofori Panin, asking the president and his colleagues across the political spectrum to call their supporters to order when they make disparaging remarks about political opponents.

The Okyenhene made the appeal on Tuesday at the Flagstaff House, the seat of government, where he and the Eastern Regional House of Chiefs were paying a courtesy call to President Mahama.

The Okyenhene, who is the president of the regional house of chiefs, appeared worried about the level of insults in Ghana’s body politic and called on all parties to control disrespectful utterances, especially those direct towards the elderly.

He asked all stakeholders not to allow modernization to erode the civilized manner in which they were brought up and expressed his hopes that the president would lead the way.

President Mahama responded by challenging the Okyenhene to redirect his appeal to those people who are most guilty of using disparaging remarks, insisting that everyone knows who these figures are:

“I am also happy about the point you made about people adopting insulting behavior, we know who those people are and I think the message should be addressed directly to them.

“Many of us have never insulted our political opponents ever in our lives, and we never will; you can count on us to be decent in our politics.

“But there are some individuals in our politics in this country who are in responsible positions, who at every step of the way are insulting the political opponents, and we know them. And so I think that Nananom [chiefs] should feel bold to identify them and address the message directly to these people and ask them to be cautious in the way they go about their politics.”

President Mahama also reported being disturbed by the fact that, “week on and week on, rallies are held, the president is insulted, every decent person is insulted in this country.”

In responding to the Okyenhene‘s earlier appeal for everyone to respect and accept the Supreme Court’s decision on the petition brought by Nana Akufo-Addo and two other NPP leaders, President Mahama stated, “we all have sworn to abide by the constitution and so there is no doubt about that obligation in this matter.”

But NPP Communications Director Nana Akomea told Evans Mensah on Joy FM’s Top Story that although it is good for the president and other political actors to pledge their intentions to comply with the outcome of the petition, “it should not be a matter of choice to agree or to abide by what the Supreme Court decides because it is final; it is the law.”

Touching on the politics of insults, Mr Akomea claimed that the president was “disingenuous” in trying to absolve his party of complicity in the practice, insisting that disparaging remarks have come from all sides. The movement to bring more respect into politics, he said, is an exercise that should engage everybody, “in the business of decrying insulting language in our politics.”

Meanwhile, Nana Osei Nyarko III, Vice President of the Eastern Regional House of Chiefs, told Joy FM’s Top Story that the chiefs went to the Flagstaff House of their own “volition” and that they “are satisfied” with the president’s responses to the issues they raised there.