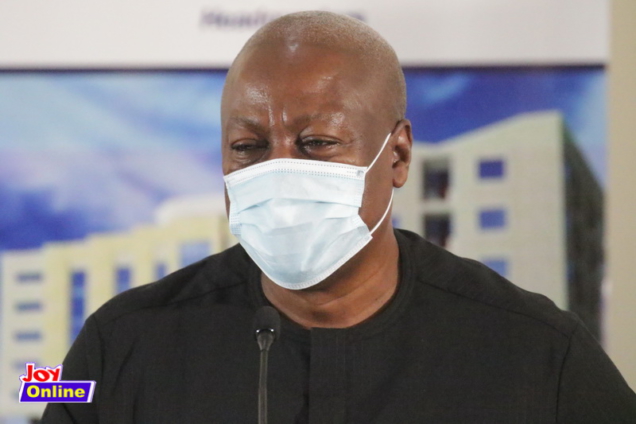 Former President John Mahama has promised the people of Akatsi South that youth employment will be cardinal in his second coming.

He, therefore, urged the people to turn out in their numbers to vote massively to make this possible.

The former President said this on Tuesday when he met the chiefs and elders of Akatsi South, some religious groups, and the leadership of the party in the constituency at the Akatsi-Torve Kpota Catholic Diocese Long Hall.

The flagbearer of the NDC stated that when Ghanaians give him another chance to rule the country, he would complete all the projects that were initiated by the NDC, but halted.

Mr Mahama enumerated some abandoned projects such as the Akatsi District Hospital, which he said was 90 percent complete, some electrification projects in the area including the Avenorpeme to Xavi road, Ave-Dakpa road among others.

He promised residents of Akatsi South of providing the requisite processing machinery that would help farmers in processing their farm produce to avoid post-harvest losses.

Torgbui Dorglo Anumah VI, Paramount Chief and President of Avenor Traditional Council on behalf of the chiefs and people of Akatsi South, appealed to Mr. Mahama to complete all uncompleted projects he mentioned if reelected.

He expressed excitement about the visit and advised the flagbearer not to endanger the peace now, during, or after the elections.

Multitudes of party supporters milled to the venue to catch a glimpse of Mr Mahama with the security having a tough time wading off the people at Torve.