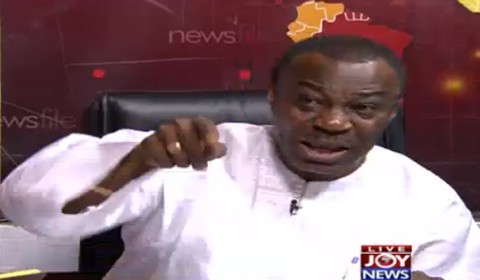 The Minority in Parliament says Ghana risks having its international credit rating downgraded, if government does not halt the “excessive borrowing from both domestic and international markets”.

The Minority is projecting that Ghana will lose its current B+ credit rating which allows government to borrow at high interest rates on the international market. The NPP’s finance committee in Parliament made this remark at a news conference Thursday, September, 26, 2013.

New Patriotic Party MP for Tafo Pankrono, Dr. Anthony Akoto Osei, who addressed the media on behalf of his colleagues said: “It also needs to be pointed out that this 49.5% debt ratio means the country is on the verge of crossing the 50% threshold. Beyond this threshold, international credit rating agencies will downgrade our credit rating”.

The former Minister of State in charge of Finance also described as unprecedented and unbelievable that, with a month to the presentation of the next budget statement, “government has not paid a pesewa into most statutory funds”.

He said although government has made sure to collect all the necessary levies from taxpayers, it has failed to pay into accounts such as the District Assemblies’ Common Fund, the GETFund, the Road Fund and many others.

He has therefore called on the John Mahama administration to account for the monies it is collecting from Ghanaians.

Read below the full statement presented by Dr. Akoto Osei:

Ladies and gentlemen, we have had the occasion, several times in the past, to comment on the poor economic management by the NDC administration and the consequent poor state of the economy. We have commented on the excessive and illegitimate expenditures during the 2012 electioneering campaign by the ruling party (the NDC), the resulting huge deficit and debt, the excessive borrowing from the domestic market, the crowding out of Ghanaian businesses from the credit market, the growing unemployment, the unbridled taxation (including taxation on condoms), government indebtedness to utility companies, and the general corruption and mismanagement of public finances.

In February this year, President Mahama also admitted to the nation that Ghana’s economy was in distress and that the meat was down to the bone. It was a face-saving admission that, having been in power for four years, the NDC government was presiding over bad economic management. Seven months on, things have gotten worse. There is now consensus, even within government, that the economic situation has now deteriorated into complete crisis. The signs are everywhere.

Our debts are rising alarmingly. From a total public debt of GH¢9.5 billion in January 2009, Ghana’s public debt stands at GH¢43.9 billion (49.5% of GDP) at the end of August 2013. Between December 2012 and August 2013 (that is within the last 8 months), government added GH¢8.8 billion to our public debt. This means, we are borrowing at a rate of GH¢1.1 billion per month. This is not just unsustainable, it is also unreasonable! And out of this recent increase in debt stock, about 63% (that is GH¢5.5 billion) comes from domestic sources. With this huge appetite for borrowing from the domestic market, it is grossly incompetent and disingenuous for government to blame banks for high lending rates to businesses and individuals.

It also needs to be pointed out that this 49.5% debt ratio means the country is on the verge of crossing the 50% threshold. Beyond this threshold, international credit rating agencies will downgrade our credit rating. Already, this debt figure does not include the greater chunk of the US$3 billion Chinese loan. If Ghana is downgraded, the B+ rating bequeathed by the Kufuor administration will be lost, and Ghana will have to borrow at very high interest rates.

Ladies and gentlemen, in spite of this excessive borrowing from both domestic and international markets, the NDC government can still not meet its statutory obligations. What does this mean? Every year, government collects various taxes and levies; income tax, value added tax (VAT), national health insurance levy (NHIL), petroleum taxes, communications service tax (or talk tax), condom tax (recently), taxes on outboard motors and cutlasses, etc. Government is required by law to put some portions of these taxes into specific accounts to pay for specific services to tax payers (that is, you and I). These accounts include the District Assembly Common Fund (DACF), the National Health Insurance Fund (NHIF), the Ghana Education Trust Fund (GETFund), the Road Fund, etc.

The sad and bitter truth is that, for this year, 2013, government has collected the taxes alright. People have paid income taxes and all kinds of taxes, and government has collected them. Unfortunately, the Mahama administration has failed to pay these monies into the various accounts. The DACF which is used by the district assemblies to provide social services to the people is in arrears of GH¢652 million, according to government’s own statement. To be forthright, government, having collected taxes from the beginning of this year, has not paid a pesewa into the DACF. The NHIF used for the delivery of health services is also in arrears of GH¢350 million. The Road Fund used for filling potholes and doing other road maintenance programmes is in arrears of about GH¢400 million. The GETFund used to provide education infrastructure and related support to Ghanaian public schools, from basic to tertiary levels, is also in arrears.

So, not only is government borrowing excessively without telling us what they are using the money for, government cannot account for taxes paid by you and I for the purpose of delivering social services, and therefore statutory payments into these accounts are not being paid.

The consequences for the welfare of ordinary people are many. Districts assemblies in our rural areas are the hardest hit. Government’s insensitivity to the plight of Ghanaians means garbage is not collected regularly in Bole, nor are potholes patched in Cape Coast. It also means roofs of public schools ripped off by storms cannot be replaced in Akatsi. Further, district assemblies cannot afford to pay their utilities bills. In Kumasi, the ECG recently cut off power to KMA for non-payment of its bills. Even money to buy A4 sheets to run their offices is not available.

About two weeks ago, several government cheques bounced at the local government level because the accounts on which the cheques were to be drawn had been quietly closed upon the instructions of government. Most development and local government initiatives have come to a standstill because government has not transferred the needed resources to the local level. This is a serious problem. In the past, we all complained when these funds delayed for a month or two. What is happening now has never happened before in these proportions. It is unprecedented and unbelievable that a month to the presentation of the next budget statement, government has collected taxes but has not paid a pesewa into the district assembly common fund. This is crisis!

But the problems are not limited to the DACF. The arrears on the NHIF has serious consequences for the health care of ordinary Ghanaians. No wonder that national health insurance scheme is no more working. Because there is no money in the NHIF, service providers are not being paid for their services, as a result of which patients who go to hospital with their NHIS cards pay for even paracetamol.

Also, anti-snake venom badly needed in the rainy season to neutralize snake bites in rural areas cannot be provided. What at all is government using the taxes for that the Mahama administration considers more important than the health of the people?

And the same goes for the GETFund. Most contractors who have executed GETFund projects are either out of business or reeling under huge debts. So educational infrastructure from basic to tertiary education is not being upgraded.

Yesterday, contractors in the Brong Ahafo region, who had been contracted to provide classroom furniture two years ago issued an ultimatum to government to pay them or face legal action. Educational material and general logistical support to our educational system are not being purchased. This will affect the quality of our education. Worse still, complimentary grants such as school feeding and capitation grants are also in arrears. The school feeding programme and capitation grant that expanded enrollment in basic school are now under serious threat. This will negatively impact the nation’s roadmap to attaining the MDG on 100% pupil enrolment by 2015.

The same story is repeating itself at the Road Fund. Routine road maintenance has come to a halt. Potholes are developing on almost all our roads, causing fatal accidents. The bitter fact underlining all this is that road fund levies collected from you and I cannot be accounted for by government.

The irony of the situation is that, while government has failed to meet its constitutional and statutory obligations, it continues to make payments on non-statutory obligations to its cronies. We shall revisit this matter into greater detail in due course.

Ladies and gentlemen, when government took the Eurobond recently, we were told that part of the money would be used to settle contractors government was owing. Ghana has received all the Eurobond money alright, but to date, the promised payments to contractors have not happened, and contractors and suppliers continue to suffer. Once contractors and suppliers are distressed, businesses go down, ordinary people lose their jobs, and both corporate and income tax revenues go down. This affects the livelihoods of people and the economy adversely.

The painful fact is that, a government that engages in so much indiscipline and recklessness in its expenditure pattern in an election year as the Mahama government did in 2012 will certainly live to reap bad harvest. This is the crisis confronting Ghana’s economy today.
We thank you for your audience.