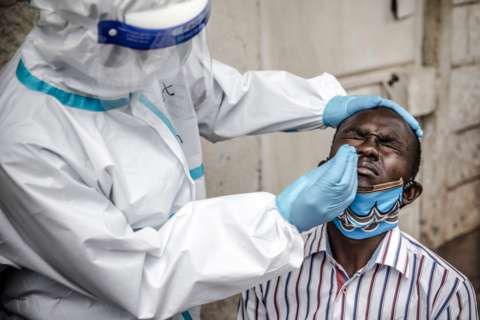 Senior Research Fellow at the Kumasi Centre for Collaborative Research has said mass testing would not directly reduce any deaths or infections but it can give the right big picture at the right time.

Dr John Amuasi explained that to an extent it cannot solve any problem directly but using the method can help to get a full picture of the country’s coronavirus situation.

“Mass testing is not going to directly reduce the number of deaths, it is not going to do anything directly for you but it is an important thing that we need to employ so that we can see the big picture,” he said on the Super Morning Show, Monday.

Minister for Information, Kojo Oppong Nkrumah said on JoyNews’ Beyond the Lockdown on Sunday that mass testing would not solve any problem.

Adding his voice to calls for mass testing, the global health expert explained that employing mass testing as a tool in the national fight against Covid-19 would allow one to see the larger picture and not only that but to see it quickly enough because time is of the essence.

Dr Amuasi, however, acknowledged that government may encounter some challenges should they ever employ the method.

“The challenge with mass testing is that you’re going to get more cases and this is where I see the challenge of gov’t because people are measuring on indexing by number of cases.”

“What you should be following is our positivity rate, the reproductive number, the case mortality rate of the number of people who die out of those who have tested positive,” instead, the researcher said.