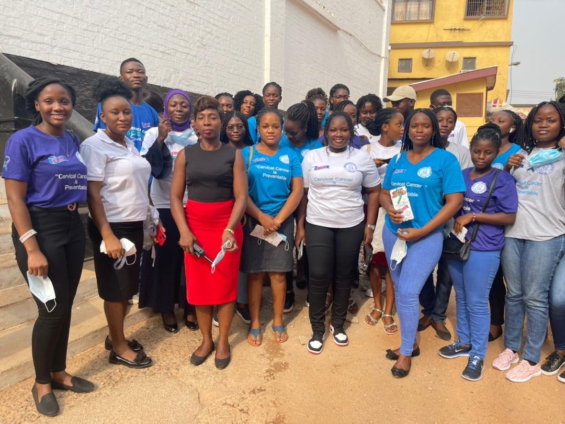 Inmates and prison officers of the Kumasi Central Prisons have benefitted from a free cervical cancer screening by the Medical Women Association of Ghana.

Seventeen out of 22 female inmates were screened.  Seventeen prison officers were also screened.

The exercise forms part of activities to mark the cervical cancer Awareness Month in Kumasi.

Cervical cancer is the second leading cause of cancer deaths in Ghana. The WHO estimates the annual age-standardized cervical cancer incidence rate in Ghana as 29.3/100,000, which is four times the US rate, while the mortality rate is 23.8/100,000, or ten times the US.

Cervical cancer is caused by Human papilloma virus subtypes 16 and 18.

Not less than 14 high-risk cancer-causing types have been identified. These include HPV subtypes 16 and 18, which are recognized as the cause of 70% of cervical cancer and its pre-cancerous lesions.

January is designated by the World Health Organisation (WHO) as Cervical Cancer Awareness Month. Hence, the Medical Women’s Association in partnership with LEXA Ghana Limited organised a cervical cancer screening exercise at the Kumasi central prisons.

A specialist Obstetrician/Gynaecologist and chairperson of the Cervical cancer awareness campaign in Ashanti Region, Dr. Aisha Ali Issaka, explained: “This screening exercise is the little we can do to help attain the WHO goal of getting 70% of our population screened by 2030.”

“There is a need for great awareness campaigns to educate the public that cervical cancer is preventable and when detected early, it is treatable.

“The disease is a burden in developing countries like Ghana, where it remains the second leading cause of cancer deaths. If there is something we can do about it, why not?” she asked.

The Officer-In-Charge of the Female Department of the Kumasi Central Prisons, Assistant Director of Prisons (ADP) Hannah Hilder Awanor was grateful to the team for the gesture.

She appealed to other groups to come to their aid.

“We are so excited. This is something some of these inmates and officers have never done before.

“We will be very happy if these exercises are done every year. We need drugs for the inmates, especially painkillers and antibiotics, which are commonly prescribed for them when they go to the hospital.

“Also, our infirmary requires some gadgets such as BP checking machines and those used to check sugar level,” she said.

Among the team were Medical students from KNUST School of Medicine and Dentistry.

The Head of KNUST MSA Education Committee, Russell Agyeman Ofori said, “many inmates had questions about cervical cancer and other health concerns which we answered. I’m glad it has been a fruitful day. Education committee is all about creating awareness and we were able to do that.”

Apart from the inmates and officers, the team extended cervical cancer education to some market women and passers- by at the Adum Market.

The event was sponsored by Lexta Ghana Limited.