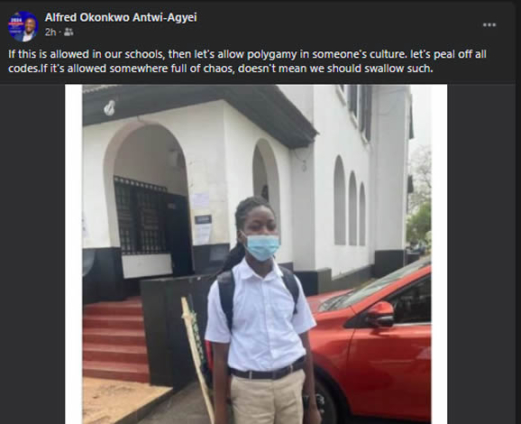 The Ghana National Education Campaign Coalition (GNECC) has urged the Education Ministry and Ghana Education Service (GES) to work with stakeholders to resolve in a comprehensive manner the Achimota School’s admission requirement for students, including Rastafarians.

The resolution process, it said, must take into account all the specific aspects involving the two Rastafarians students to enable them to be admitted into the Achimota School.

The GNECC in a statement, signed by its Executive Council Chairman, Joseph Atsu Homadzi, and copied to the Ghana News Agency, on Tuesday, said it had “keenly observed with concern the different positions taken among key stakeholders in education on an issue regarding the admission of a child described as a Rastafarian into Achimota School.

“The child was said to be rejected later because of the refusal of his parents to sign unto the school’s code of conduct that required students to keep a “short hair”.

The GNECC said as a Coalition focused on promoting the rights of the Ghanaian child to free and quality pre tertiary education, it was concerned “when there were potential threats to the attainment of these rights, particularly, where they are inconsistent with the 1992 Constitution of the Republic of Ghana.

“In the view of the Coalition, the principle of best interest of the child as enshrined in the Children’s Act 560 and Article 25 and 28 of the 1992 Constitution of the Republic of Ghana must be strictly taken into consideration in such matters”.

Opinions have been largely divided among individuals and pro education groups on whether the students must be admitted into the school with their dreadlocks or not.

The GES initially asked the headmistress of the School to receive the children with their long hair on religious grounds but later rescinded its decision to back the school authorities that the school rules must be universally applied.