Mosquitoes ‘disappearing’ in some parts of Africa 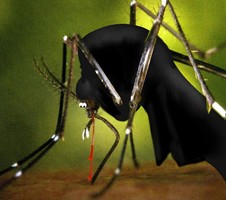 Malaria-carrying mosquitoes are disappearing in some parts of Africa, but scientists are unsure as to why.

Figures indicate controls such as anti-mosquito bed nets are having a significant impact on the incidence of malaria in some sub-Saharan countries.

But in Malaria Journal, researchers say mosquitoes are also disappearing from areas with few controls.

They are uncertain if mosquitoes are being eradicated or whether they will return with renewed vigour.

Data from countries such as Tanzania, Eritrea, Rwanda, Kenya and Zambia all indicate that the incidence of malaria is dropping fast.

Researchers believe this is due to effective implementation of control programmes, especially the deployment of bed nets treated with insecticide.

But a team of Danish and Tanzanian scientists say this is not the whole story. For more than 10 years they have been collecting and counting the number of mosquitoes caught in thousands of traps in Tanzania.

One possibility for the reduction in numbers is climate change. Patterns of rainfall in these years were more chaotic in these regions of Tanzania and often fell outside the rainy season. The scientists say this may have disturbed the natural cycle of mosquito development.

But the lead author of the study, Professor Dan Meyrowitsch from the University of Copenhagen, says that he is not convinced that it is just the changing climate.

“It could be partly due to this chaotic rainfall, but personally I don’t think it can explain such a dramatic decline in mosquitoes, to the extent we can say that the malaria mosquitoes are almost eradicated in these communities.

“What we should consider is that there may be a disease among the mosquitoes, a fungi or a virus, or they may have been some environmental changes in the communities that have resulted in a drop in the number of mosquitoes”

The research team also found anecdotal evidence that their discovery was not an isolated case.

Prof Meyrowitsch added: “Other scientists are saying they can’t test their drugs because there are no children left with malaria.

“They observed this in communities with no large interventions against malaria or mosquitoes. It may be the same scenario that the specific mosquitoes that carry malaria are declining very fast now”

The researchers are unsure if mosquitoes will return to these regions. If they do, one particular cause for concern is the young people who have not been exposed to malaria over the past five or six years since the mosquitoes began to decline.

“If the mosquito population starts coming up again” says Professor Meyrowitsch “and my own assumption is that it will, it is most likely we will have an epidemic of malaria with a higher level of disease and mortality especially amongst these children who have not been exposed.”