'My appointment has not been terminated' – GACL MD reacts to his dismissal - MyJoyOnline.com 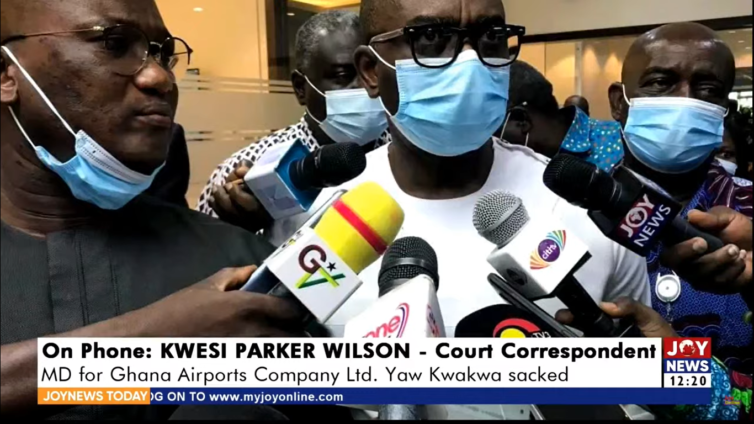 The dismissed Managing Director of the Ghana Airports Company Limited, Yaw Kwakwa has expressed surprise about his dismissal from office.

According to the embattled Manager, he is unware of the termination of his appointment, thus, awaits an official correspondence to that effect.

The news about Mr. Kwakwa’s dismissal broke whilst he was leading Parliament’s Roads and Transport Committee to inspect the McDan Aviation facility at the Kotoka International Airport (KIA).

“I don’t know what you are talking about. My appointment has not been terminated so if you have any evidence… I don’t know about it,…. but when I get to that bridge I will cross it,” Mr. Kwakwa told the media when he was asked about his dismissal on Wednesday.

According to JoyNews’ Kwesi Parker Wilson, Management of GACL including the Deputy Transport Minister, Hassan Tampoli, who were with Mr. Kwakwa got equally astonished upon hearing the news.

It is unclear why Mr Kwakwa was sacked, but in the last few weeks, the Airport Company and newly established private jet company operated by McDan Aviation have been involved in a back and forth publicly.

On January 1, the GACL ordered the newly launched McDan Aviation to suspend the use of the Kotoka International Airport (KIA) until further notice.

The Company has accused McDan Aviation of breaching the laid down procedure after procuring its license to operate in 2019.

The Managing Director of McDan Aviation, Daniel McKorley, wrote to confirm their suspension of operations as instructed by the Airport Company.

Meanwhile, the issue has been resolved and the aviation company has started operations.

Tags:
Ghana Airports Company
My appointment has not been terminated
Yaw Kwakwa