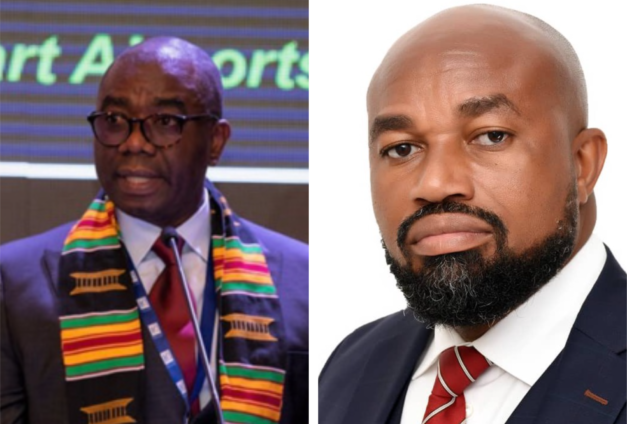 The Deputy Transport Minister, Hassan Tampuli, has refuted claims that the former Managing Director of Ghana Airports Company Limited (GACL), Yaw Kwakwa, was dismissed due to strife with McDan Aviation.

On Wednesday, Mr Kwakwa was relieved of his duties after a letter dated February 4, 2022, was leaked to the public.

Before his sacking, his outfit had called out McDan Aviation for some breaches at the Kotoka International Airport (KIA) and suspended them indefinitely operating at the terminal.

However, the private jet airline went ahead with its scheduled event to officially launch operations.

Some persons have since attributed his dismissal to his decision to suspend McDan Aviation’s license.

But speaking on JoyNews’ Newsfile, Mr Tampuli insisted that that is a stark contrast of what many insinuate.

According to him, the Former Manager did the right thing by suspending the operations of McDan Aviation when the private jet airline breeched laid down procedures.

In view of this, the Gushegu lawmaker says it is incorrect to link Mr Kwakwa’s dismissal to the feud between McDan Aviation and the Ghana Airports Company Limited.

“I will find it hard for anyone to believe that Mr Yaw Kwakwa has been relieved of his position because he was doing the right thing.

“The Ministry stood behind Mr Kwakwa as the MD to ensure that the right thing is done. So there is no basis for the conclusion that Mr Kwakwa has been relieved of his position because of what happened at the Airport. It’s completely false,” he stressed on Saturday.

He further revealed that the Managing Director of McDan Aviation, Daniel McKorley, acknowledged his mistake and rendered an apology for sidelining the instruction of GACL.

“As a matter of fact, even McDan had to come and apologise to the Minister [of Transport] for going ahead to do the inauguration even though Ghana Airports Company had put a stop to it,” he told Samson Lardy Anyenini.

DISCLAIMER: The Views, Comments, Opinions, Contributions and Statements made by Readers and Contributors on this platform do not necessarily represent the views or policy of Multimedia Group Limited.
Tags:
Ghana Airport Company Limited
Hassan Tampuli
McDan Aviation
Yaw Kwakwa