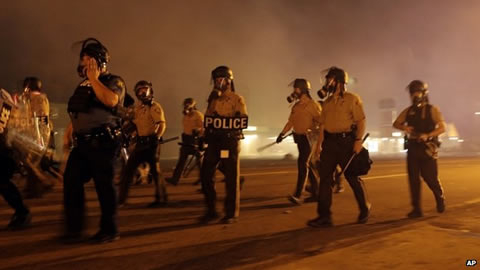 I’m a Black British-Ghanaian, and I’ve often wondered what would the police do to me if they believed I was a threat? The answer is they would kill me and leave me lying in the street for hours. My lifeless body with blood falling from bullet holes would leave onlookers traumatized by the horrific scene played out in real time. This is the reality faced by African-Americans who are unlucky enough to encounter police in the wrong place at the wrong time.

Most of those murdered by police were unarmed: 18-year-old Michael Brown was shot and left lying in the street for four hours leaving locals horrified; 28-year-old Akai Gurley was shot dead by a rookie officer, showing that merely existing in a Black body can put one’s life in danger; 19-year-old Tony Terrell Robinson was killed by police at a time when what he really needed was help; 43-year-old Charley Leundeu Keunang, originally from Cameroon, was shot dead by LAPD officers. In addition, 50-year-old Walter Scott was shot while running away from an officer. The officer then handcuffed him while he lay face down, dying.

Pre-existing stereotypes rooted in the minds of members of law enforcement categorize Black people as “dangerous,” “threatening” or “criminal.” These stereotypes precipitate inexcusable violence against Black men and women. Individuals in law enforcement act in accordance with false beliefs often without conscious awareness. Consequently, police officers are dangerous puppets who function as pieces in a chess game. In this game, the “white” pieces always win.

As a Black British-Ghanaian, my heritage ensures that my features are conspicuously Afrocentric: I have full lips, a broad nose, dark eyes and dark skin. My features evoke negative stereotypes, which during an encounter with police, would result in my automatic assignment to the “criminal” category within their faulty belief systems.

Clearly, Black women do not escape the wrath of police: Marlene Pinnock, 51, sustained head injuries after being beaten by a California Highway Patrol officer; 21-year-old London Colvin was attacked by a police dog while police held her down, and 19-year-old Kenisha Gray had her teeth knocked out by police.

I’m categorized as African-American until I start speaking. When I speak it’s apparent that I’m an immigrant, but not the toilet-cleaning-ice-cream-selling kind of immigrant. I’m different, and because of this I disrupt the predetermined order of the universe: my accent, coming from my Black face, creates an unsettling chaos that causes ripples of confusion to spread across a roomful of white strangers. People tend to look twice as if they’ve been propelled into a Twilight Zone, battling with a need to make meaning of the person in front of them.

In some instances, my accent has helped me transcend the confines imposed by class. It has also allowed me to secure professional experiences that are different than the experiences of an African-American who grew up in a comparable level of poverty — as I move up the ranks serving students with disabilities in the private sector, the number of Black people who move with me diminishes.

My English accent not only makes me an exciting novelty, but it serves as protective coating, which allows one to listen or indeed assume my intelligence without really questioning the validity of my assertions. I am given a distinct level of privilege, which is akin to white privilege. With privilege comes a level of social acceptance that is topographically different from the degree of acceptance given to African-Americans. But this privilege has its limits. After all, I’m still Black.

In light of my experiences, I can only imagine the magnitude of opportunities given to white British expats living in America. I also wonder how my life would be different had I been born in America. For one thing, I would not have enjoyed the social supports that led to the full payment of my tuition by the government, and my subsequent education at a leading university.

According to my reconstructed inner dialogue, being Black and articulate are two pieces of a puzzle that fit perfectly together. When I listen to influential Black speakers, such as Martin Luther King Jr., Malcolm X, Stokely Carmichael and Angela Davis, I realize they possessed a mighty command of speech that threw listeners into a state of disequilibrium. They triumphed in the center of this chaos, enshrouded in the denseness of self-love. And it is through the thickness of self-love that I proclaim that Black lives matter. The senseless deaths must end.

Since I have a comfortable life, it would make sense for me to keep quiet, and reject the Black Lives Matter movement, but I cannot ignore my resemblance to many of the Black and brown men and women murdered because of racial discrimination. The majority of these unarmed men, who are now permanently six feet under, could easily fit into my life as my husband, brother or son.

Back in 2007 when I decided to move to America, some of my liberal British friends were horrified. They wondered why I would decide to make a life in a country that didn’t look after its own. I was ignorant to what they were saying, and had my mind set on the American Dream. Sadly, through the deaths of unarmed men — and the indifference to these deaths by many in the white majority — my ignorance has been washed away. I now perceive the murder and criminalization of Black men and women as confirmation of the existence of an American Nightmare. Therefore, it is my duty — by using the privilege associated with my English education — to expose the human rights abuses presently occurring in America.

Here in America, racism dances in the shadow of freedom and gives rise to anything but a post-racial America.

Here in America, my English accent may help advance my career or provide me with a certain degree of privilege, but it will not save me from police brutality. If perceived as a threat, I would be shot dead just like the other unarmed Black people.

Jacqueline Bediako is a writer, teacher and activist currently living in Brooklyn, New York. She describes herself as a Black British-Ghanaian, and has called New York City home for the past seven years. Jacqueline’s work focuses on race, politics, immigration, and the education of students with disabilities. Follow her @jb2721.