My donation to NPP not to influence delegates - Boakye Agyarko - MyJoyOnline.com

My donation to NPP not to influence delegates – Boakye Agyarko 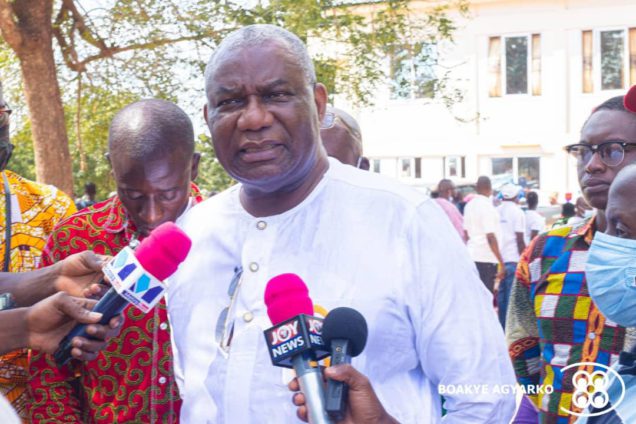 Former Energy Minister, Boakye Kyeremateng Agyarko has parried claims that his monetary contributions during the regional conferences are an attempt to induce and court the support of the delegates during the impending flagbearership race.

According to him, the move is a continuation of a tradition he began some 3 decades ago. The aspiring presidential candidate since the beginning of the NPP’s regional delegates Conference has committed ¢10,000 to each of the 16 regions.

The former campaign manager observed that “from 1992, I have not withdrawn my hand from this party. So if the party needs something today and in continuation of the tradition of giving, what is wrong with that?” he quizzed

He is not the only one. Vice Dr. Mahumudu Bawumia has also committed ¢20,000 to each region and ¢2,000 to the 275 constituencies whilst his closest contender, Alan Kwadwo Kyeremanteng has also devoted ¢10,000 to each of the 16 regions.

Reacting to the claims of vote-buying, Mr. Agyarko said he has no intention of monetizing the race. “I am not doing this for any race, in 1992 when I was donating hundreds of thousands of dollars to this party, did anybody ask me what I was trying to influence, we are building the party”.

He also explained that his ¢10,000 donation to the party would not make up for the amount of resources required in politics.

In an interview with JoyNews, he asked the supporters to reward his 30 years of loyalty to the party, insisting that no matter the outcome, he will continue to support the party.

“I will not monetize it, win or lose I will continue to support this party. if somebody wants to monetize the race that’s their choice. I have served this party loyally for thirty years and all I ask for is a just reward if they so choose I will say God bless them, if they say no, that’s the choice they have to make,” he added.