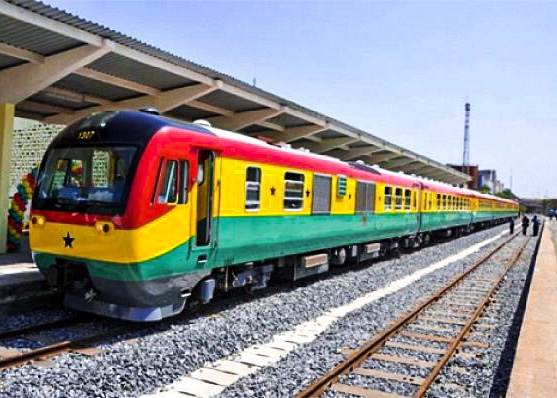 For nearly a century – from the last decade of the 19th century to the late 1970s, trains played a major part in this country’s political, social, economic and even cultural life. Ghana’s rail tracks led to places where the British colonialists found the venture most profitable and useful for transporting raw materials. This can be seen in the railway triangle that was familiar to every schoolchild of that era.

Easy to draw and explain, the railway lines formed an A-shape with the apex at Kumasi and the two feet representing Accra in the East and Secondi-Takoradi in the West. Almost like a perfect A, it even had a short line connecting the two legs in the form of the Tarkwa–Huni Valley line.

That railways sustained the country’s colonial economy was no “book matter”; it was there for all to see. Trains carried timber, bauxite, manganese, coca and all manner of raw materials from the hinterlands to the Takoradi Harbour; they also transported traders, civil servants, students and different categories of passengers whose movements contributed to the nation’s development.

Unfortunately, no trains have run on most of these tracks for the past 35 years or so. Most Ghanaians under the age of 45 have probably never seen a train, let alone travel on one. In many ways, the collapse of Ghana’s rail sector is a direct reflection of the downward trajectory of the nation’s economic fortunes in the 1970s and early 1980s.

Gradually, but relentlessly the service headed towards an inglorious halt; train stocks could not be replaced, parts had to be cannibalised to repair other trains until one by one, the tracks became silent decorations on the ground.

What most of us may not be aware of is that, again, gradually but hopefully, our rail lines will carry rolling stock again. This is the question that took me to the office of Yaw Owusu, the CEO of the Ghana Railway Development Authority, GRDA. The CEO is clearly a man on a mission and his obvious fondness for the railway project would have infected me even if I had been a cynic.

I wanted to find out if it was true that trains would be running any time soon on our tracks. He pulled out some charts, like any good CEO would, and showed me the layout of the new railways vision of the country. The current rail tracks are a total of 1000 kilometres but the new plan encompasses more than three times that length across the country.

His optimistic analysis as outlined in the plans to re-establish railways as a major player reflects the thinking of President Nana Akufo-Addo who has described allowing the railway sector to collapse as a “strategic error”. The President, while inspecting the Railway Training School at Ketan two years ago, revealed that it had been his plan since he assumed office “to do anything necessary to revive the sector”, according to a Citi news report.

The GRDA has ambitious plans. “We plan to build some 3840 kilometres of new tracks for the rail network in the future”, Mr Owusu explained, adding that all of the tracks will be standard gauge instead of the narrow gauge which has existed since the advent of rail travel in the country. When the entire network becomes operational, all 16 regional capitals in Ghana will be linked by railways.

Instead of the triangle we are familiar with, the new network will spread across the country in three main formations. The Western line is the Takoradi-Kumasi line, the Eastern line is the Kumasi-Accra line but there are new phases and branches added to these existing routes depending on the need for such additions. For example, the Eastern line detours to Kyebi because of the bauxite in the area.

The new addition is the Eastern Extension Line which runs from Tema through Mpakadan across the Volta River. When it is completed, it will run all the way through Hohoe to Yendi, Tamale to Paga on the border with Burkina Faso.

That is some vision! But I wanted to know how much of this real rather than something existing in the pipeline. Railway construction doesn’t come cheap. It costs about 5 million US dollars to construct one kilometre of rail track and that includes bridges, drains, culverts and all other infrastructure supporting the rail tracks and the business of running railways in the country.

I was impressed that given the constraints in which the global economy finds itself, our rail sector has steadily but quietly moved ahead with admirable purpose. Given the financial overlay required to complete the whole plan, it is being implemented in bits according to national priorities.

The western line will eventually run from Takoradi Port through Huni Valley to Kumasi via Obuasi. A branch is proposed to connect the bauxite producing areas of Awaso and Nyinahin to the Takoradi. According to the GRDA, the delivery of that line will accelerate the Integrated Aluminium Industry Project. Currently, the emphasis is on the Takoradi Port-Manso section, which includes the mineral-rich Tarkwa-Nsuta area.

So far, work on that section is almost complete, indeed that line is still active on the old narrow-gauge tracks but the loads are small because of low axle capacity. The new standards gauge infrastructure will correct that deficiency.

The Eastern Line Accra/Tema Port through Nsawam and Koforidua to Kumasi. Currently, the Accra/Tema Port-Adjin Kotoku-Nsawam with a branch route to Kasoa is under contract with ongoing construction works. This route will improve the transportation of goods and passengers in the Nsawam-Accra-Tema axis and ease traffic in the heavily populated enclave.

However, the third proposed route is the Eastern Extension Line of which the Tema – Mpakadan section of the route is almost complete and expected to be commissioned and operationalised sometime this year. Negotiations have advanced for trains to be imported to run on the completed sections this year.
On paper, one can see the plans and the impact they will make when they are implemented.

Indeed, according to Mr Owusu, the whole of this lot is only the beginning. There is the trans-Africa railways idea of which our national sector will form a part. The government has plans for monorail and other kinds of train services for inter- and intra-city transportation. Those are in the future and we have to start somewhere.

So far, some $2 billion have gone into the railways infrastructure and a lot more is needed. However, I have spared the reader the more intricate financial and technical details about how the brightly coloured charts and formations are being implemented because I suspect that, like me, you will also believe it when you see it. This is why in the coming weeks I have decided to travel and see, as the tro-tro inscription says.

Stay tuned and watch this space. The train surely is coming.

DISCLAIMER: The Views, Comments, Opinions, Contributions and Statements made by Readers and Contributors on this platform do not necessarily represent the views or policy of Multimedia Group Limited.
Tags:
Ghana Railway Development Authority
Tarkwa–Huni Valley