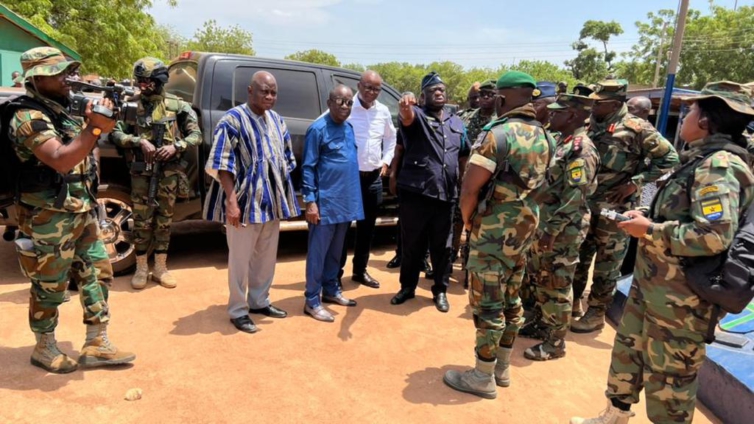 The Minister for National Security, Albert Kan-Dapaah, together with a delegation of key actors within the country’s security architecture, on June 2 embarked on a tour of the Upper East Region.

The tour was aimed as assessing the security situation towards enhancing counter-terrorism operations.

This would enable them respond adequately to the growing threats of terrorism from the Sahel region.

Areas visited included; Pulimakom, Mognori and Bawku. At Pulimakom, the delegation inspected the survey and boundary pillars between Ghana and Togo.

The team also urged the Ghana Boundary Commission to expedite action to improve the visibility of existing boundary pillars and replace the destroyed boundary pillars to ensure that operations conducted in border communities did not threaten the territorial integrity of neighbouring Togo.

The delegation bemoaned the active encroachment by both Ghanaians and Togolese on buffer zones between the two countries and urged Border Security (BORSEC) to bolster efforts to protect the buffer zones from further encroachment.

The Minister and his team stopped all construction works within the zone.

Subsequently, the delegation met with the members of the Upper East Regional Security Council, led by the Regional Minister, Stephen Yakubu, to discuss key issues of security concern in the region.

The Minister of National Security in his address to the members of REGSEC highlighted the need to enhance collaboration and intelligence sharing, while sustaining ongoing public awareness campaigns at the regional level to enhance ongoing efforts aimed at addressing the growing threat of terrorism.

The delegation further visited the barracks and some Forward Operating Bases of the XI Mechanised Battalion where the Minister interacted with Security personnel in the area and expressed appreciation for their efforts in protecting the country from the infiltration of terrorists and violent extremists.

Reiterating the commitment of the Ministry of National Security to supporting ongoing counter-terrorism operations, particularly along the northern land frontiers of the country, the Minister for National Security encouraged the security personnel to keep up their good work and promised that the needed logistics and funds would be provided to support ongoing operations.

DISCLAIMER: The Views, Comments, Opinions, Contributions and Statements made by Readers and Contributors on this platform do not necessarily represent the views or policy of Multimedia Group Limited.
Tags:
Counter-terrorism
National Security Minister