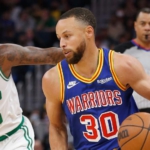 Finally, the finals are upon us. It has been quite the ride. This year has been one of the most unpredictable and the finals seem poised to be more of the same. Game 1 will be on Thursday between the Golden State Warriors and the Boston Celtics. Here are 3 things to look out for.

Finals MVP: The great Steph Curry will be playing in his 6th finals in just 8 years. Universally accepted as the greatest shooter of all time and one of the greatest point guards ever. He has won multiple MVPs (regular season) and scoring titles. He however has a glaring omission on his resume, no final MVPs! For a player of his calibre going into his 6th finals, it’s quite rare. In 2015 he lost out to surprise winner Andre Igoudala. In 2017 and 2018 Kevin Durant took the honours. Curry might not admit it but he would be eyeing that trophy. Expect him to come out all guns blazing.

Jason Tatum: The young Boston Celtic has realized potential right before our eyes. With a victory, he would have made his mentor Kobe Bryant more than proud. At just the tender age of 24, he would have led the Celtics to their record 18th championship. He has gone toe to toe with greats such as Kevin Durant, Giannis and Jimmy Butler. If he could knock off Steph Curry it would be one of the more impressive runs in NBA playoff history. He has undoubtedly cemented himself as one of the superstars of the NBA today. A strong final showing would add to his lore.

Worthy Finals: Your favourite team or player might not have made it this far (including yours truly Toronto Raptors!). However, every basketball fan would admit this is a match up worthy of a final. Both teams are top 5 in defensive and offensive ratings. They have been clearly the superior team of each respective conference. They both have solid rotations with interchangeable pieces. They both have top-level coaches. They both have star power. All indications are that this will be a long drawn out NBA finals. With the potential to go to a classic game 7.

DISCLAIMER: The Views, Comments, Opinions, Contributions and Statements made by Readers and Contributors on this platform do not necessarily represent the views or policy of Multimedia Group Limited.
Tags:
Boston Celtics
Golden State Warriors
NBA