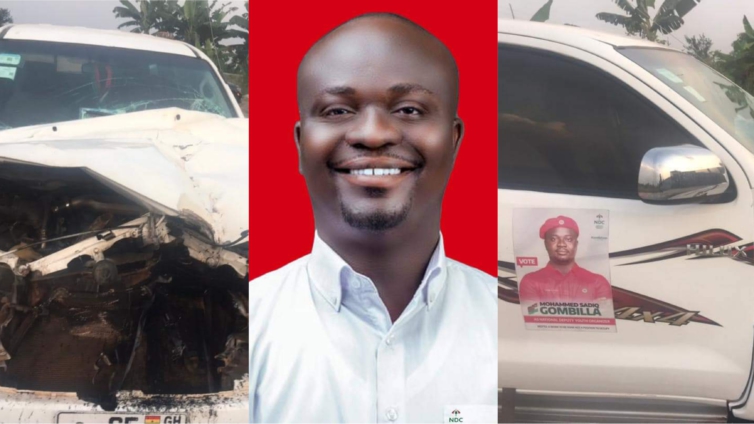 An NDC Deputy National Youth Organiser aspirant, Mohammed Sadiq Gombilla, has been involved in an accident ahead of the party’s upcoming National Youth and Women’s Conference on Saturday.

In a statement on Thursday, the campaign Coordinator, Nii Stallon, noted that the incident occurred when the team was heading from the Ashanti Region to the Eastern Region to finalise the campaign.

In the process, the vehicle which Mr. Gombilla boarded with other members of the team was ‘crushed by a tipper truck.’

“Miraculously, there were no fatalities but our driver sustained an injury and was rushed to the hospital for immediate attention”, the statement further revealed.

Despite the impact, the statement said “Mohammed Sadiq Gombilla and his PA are fit and are doing very well”.

Meanwhile, the Youth Wing of the National Democratic Congress will elect a new crop of leaders at a scheduled Congress tomorrow at the University of Cape Coast.

The exercise will see a fresh crop of party exceutives, fronting the affairs of the youth as well the women’s wings of the party.

At the close of this contest, the party will converge for its main Congress next week to elect a new party chairman, a new party general secretary and fill other portfolios ahead of the 2024 general election.

DISCLAIMER: The Views, Comments, Opinions, Contributions and Statements made by Readers and Contributors on this platform do not necessarily represent the views or policy of Multimedia Group Limited.
Tags:
Mohammed Sadiq Gombilla
NDC
NDC National Youth Wing
Women and Youth Congress