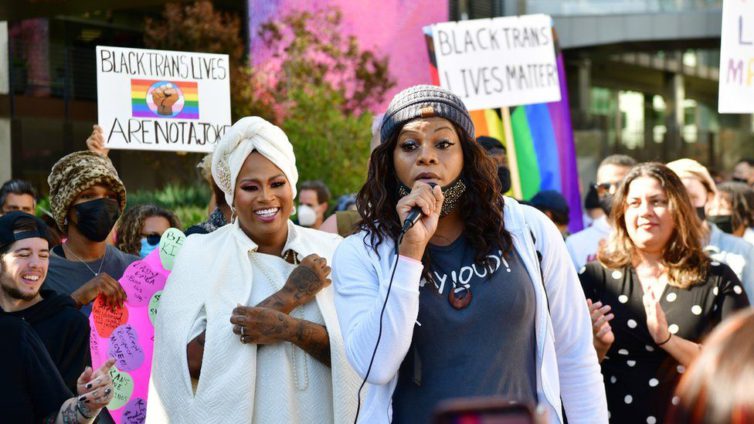 About 100 people have protested outside Netflix’s headquarters over the airing of a comedy special by Dave Chappelle, which they say was transphobic.

Demonstrators called on Netflix to fund more trans and non-binary talent, and other measures to avoid “transphobia and hate speech”.

Ahead of the rally, Netflix issued a statement in support of the activists.

Other LGBT celebrities, including Elliot Page and Lilly Wachowski, voiced their support on social media.

Netflix has been mired in controversy over The Closer, in which stand-up comedy star Chappelle says “gender is a fact” and that LGBT people are “too sensitive”.

Chappelle has laughed off the backlash, recently saying: “If this is what being cancelled is about, I love it.”

Netflix staff called for the rally, though it is unclear how many of those employees were among the protesters outside the offices.

“We are here today not because we don’t know how to take a joke. We’re here because we’re concerned that the jokes are taking lives,” said rally organiser Ashlee Marie Preston in an interview with AFP news agency.

She accused companies like Netflix of “[capitalising] off of tension” and using “algorithmic science to manipulate and distort our perceptions of ourselves and one another”.

Forty-four transgender people were killed in the US last year, according to Human Rights Watch, a non-governmental organisation.

In a leaked staff memo, he insisted that “content on screen doesn’t directly translate to real-world harm”, and emphasised the importance of defending “artistic freedom”.

But in a later interview with Hollywood trade publication Deadline, Mr Sarandos said he “screwed up the internal communication”.

“I should’ve made sure to recognise that a group of our employees was hurting very badly from the decision made,” he added.

“I respect them deeply, and I love the contribution they have at Netflix. They were hurting, and I should’ve recognised that first.”

DISCLAIMER: The Views, Comments, Opinions, Contributions and Statements made by Readers and Contributors on this platform do not necessarily represent the views or policy of Multimedia Group Limited.
Tags:
Comedy show
Dave Chappelle
Netflix employees
Protest