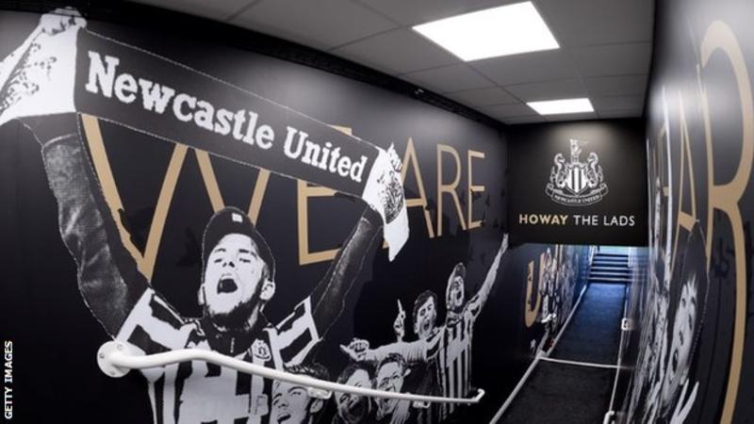 Newcastle have been owned by Mike Ashley since 2007

Newcastle United fans say they are “confused” and “heartbroken” following the collapse of the Saudi Arabian-backed takeover.

A consortium, led by the country’s Public Investment Fund (PIF), agreed a £300m deal to buy the club from Mike Ashley in April but has now pulled out.

Greg Tomlinson, from the Newcastle United Supporters’ Trust, said “answers are needed from the Premier League”.

The deal was delayed after being scrutinised under the Premier League’s owners’ and directors’ test.

The consortium, which also included PCP Capital Partners and the Reuben Brothers, has pulled out because it is understood the PIF ran out of patience.

Magpies supporter George added: “As fans, we are heartbroken. It sounds dramatic but we have suffered for 13 years under Ashley through a lack of interest and investment in the club.

“So the fact it played out how it did and for the length of time it did and then for the news to break, and we still don’t have the full picture, it’s left fans devastated.”

Legal documents were handed over to the Premier League 16 weeks ago, but the bid has been dogged by claims regarding Saudi Arabia’s human rights record and its handling of TV piracy.

The delay to the process came because the Premier League lawyers struggled to establish precise links between the consortium and the Saudi government.

Despite the ownership complications, a survey of Newcastle United Supporters’ Trust members found that 97% of them were in favour of the takeover, with many wanting rid of Ashley.

“Everyone was excited about the bid and potential investment in the city, so it represents a missed opportunity for Newcastle and the north-east as a region,” added Tomlinson.

“We’re left confused about what has gone on here – it’s been almost 17 weeks of noise.

“It’s been made clear that football supporters are the least important part in a decision which affects supporters the most.

“We have been treated with contempt.”

George, who is a solicitor, said the Premier League had to “shoulder some blame” for the deal falling through.

“The test didn’t allow [Premier League chief executive] Richard Masters to take into account moral issues which he or the people around him thought were important,” she said.

“I understand it was a confidential process but for it to carry on that long, they should at least tell us what the position was.”

She added: “Everybody was thinking we could be the next Manchester City, although caveated by what’s come to light now, that nothing really good happens with Newcastle.”

As for the future, both Tomlinson and George are hopeful, so long as that future does not involve Ashley.

American businessman Henry Mauriss is understood to be keen to buy the club for £350m.

Tomlinson says he is “sceptical” about that deal, but added: “I now hope we can find somebody who is willing to buy the club and pass relevant tests and take us forward in a proper manner.

“There is no future for Newcastle United under the current owner.”

George said: “Fans were done with Mike Ashley before this happened and looking ahead to the new season, it doesn’t give you a huge amount of motivation to spend £70 on a new shirt, or a look at transfer rumours because other clubs have already started to buy players, and we know we will be scraping the bottom of the barrel.

“There will still be things to talk about but everyone is going to wake up and feel a bit sad for a few days.”