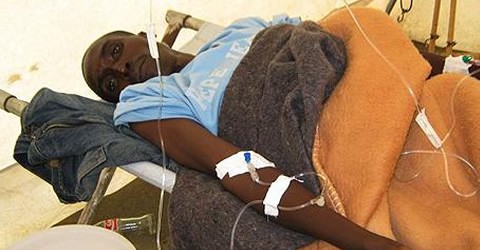 The Centre for Environmental Protection and Natural Resources (CEPNR), a non-governmental organisation (NGO), at the weekend organised a mass fumigation and disinfection exercise at Sodom and Gommorah; a large slum in Accra, in a bid to combat the current cholera outbreak.

Ms. Bridget Gordon, Coordinator of CEPNR told Ghana News Agency, in an interview in Accra, that the intervention was part of a series of programmes to support the government to fight the nationwide cholera outbreak.

She said the Small Scale Rice Dealers Association of Ghana provided chemicals and other logistics to boost the exercise.

The programme is being undertaken in collaboration with the Ministries of Health, Local Government and Rural Development, Environment and the Ghana Health Service.

She said the vision of the centre is to collate environmental information and highlight issues affecting the environment as well as team up with stakeholders and the public to support government’s efforts at combating negative acts that affect the environment.

Ms. Gordon said the initiative was in response to a call by President John Dramani Mahama to tackle the sanitation challenges confronting the nation.

It involves mass community fumigation and disinfection programmes in densely populated areas as a preventive measure against the effects of poor sanitary conditions, which lead to the spread of communicable diseases and contribute to child and maternal mortality and low worker productivity.

Ms Gordon said CEPNR aims at creation of awareness about the dangers of insanitary environment on human health and to halt the spread of malaria, typhoid and other communicable diseases.

Alhaji Abdulai Sulemana, Chairman of the Community lauded CEPNR for the exercise, saying it was the first time an NGO had intervened in the area to assist the people to fight the common diseases afflicting them.