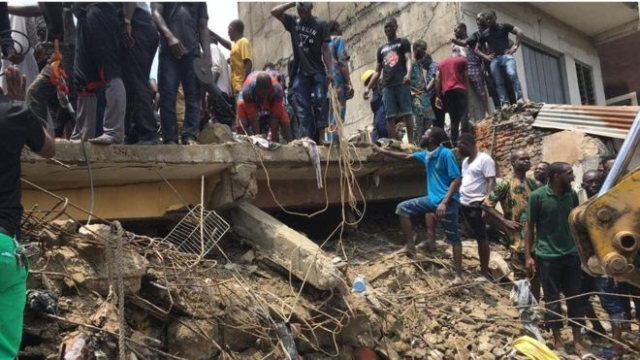 A building containing a primary school has collapsed in the Nigerian city of Lagos and pupils are feared to be among the dead and injured.

The school is said to have been on the top floor of the three-storey building in Ita Faji on Lagos island.

Pictures from the scene showed rescuers climbing over piles of broken concrete and twisted metal.

There is no word on casualties yet. Local media say it is a residential building with several apartments.

The cause of the collapse is not yet clear

The BBC's Aliyu Tanko in Lagos says emergency teams are pulling injured people from the rubble.

Some worried parents have arrived at the scene while others have gone to a local hospital to look for their children, he adds.

It is not unusual for buildings to collapse in Nigeria.

Materials are often sub-standard and there is weak enforcement of regulations, correspondents say.