Nigerians are heading to the polls to elect state and local representatives, two weeks after the presidential poll.

Ballots are being cast in 29 of the country's 36 states.

In oil-rich Nigeria, some state governors control budgets larger than those of neighbouring countries and so these are often keenly contested.

The APC won 19 states, while the PDP secured 16 plus the capital Abuja.

Mr Abubakar said the election was a "sham" and was not free and fair. He has since filed a petition challenging President Buhari's win. 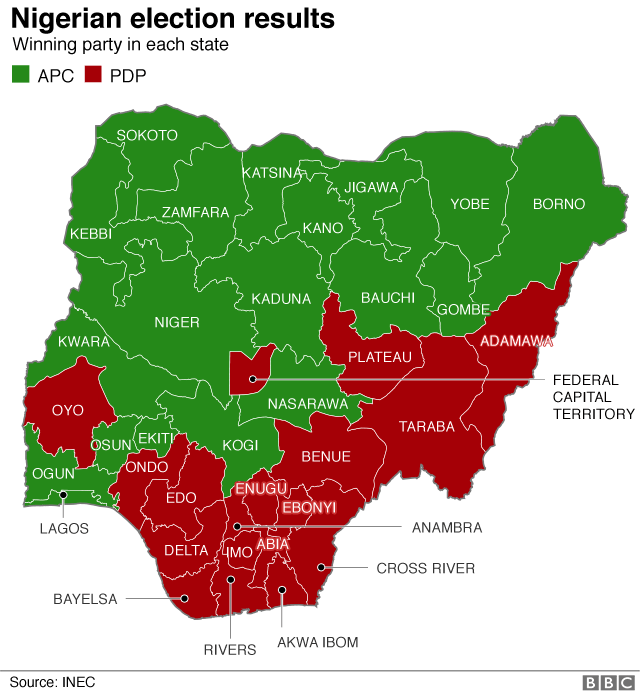 Although turnout for the presidential election was low across the country, it was higher in the northern states – one factor behind Mr Buhari's victory.

Fears of possible election-related violence has led to the massive deployment of security personnel across the country.

Seven states – Kogi, Bayelsa, Ekiti, Osun, Ondo, Edo and Anambra – will not hold elections because their governors have not finished their four-year terms.

The turnout for the state elections is expected to be higher than the 35.5% in last month's presidential election, down from 44% in 2015.

Most Nigerians take state elections seriously because their lives are directly impacted by the governor and representatives in the state legislature.

For instance, in 2000 – Governor Ahmed Sani Yerima introduced sharia law in Zamfara state and some other state governors in the north followed suit, even though the federal government wasn't fully in support of that idea.

Lagos, one of the most contested states, has an estimated population of 17.5 million people – this is more than the combined population of Gabon, The Gambia, Liberia, Cape Verde and Sierra Leone.

The state's GDP is more than that of Kenya. In fact, Lagos would be the fifth largest economy in Africa if it were a country.

Other key battle grounds that will be hotly contested between the APC and PDP are Kaduna, Akwa Ibom, Imo, Kano and Kwara.